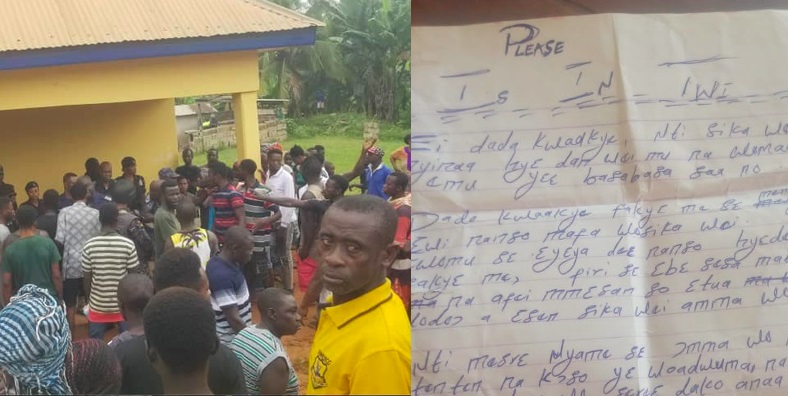 A 23-year-old youngster named Kwame Gabriel deceitfully took his stepfather’s iPhone and 9,500 Ghana cedis in Assin Fosu and left a letter to justify his acts.

The victim, Mr. Kwakye Joseph, a private security guard in Assin Fosu, claimed that he was offered 10,000 Ghana Cedis by a friend to store, in an interview with Angel Fm Reporter Kwame Owusu Asante Shadrack.

He does, however, share a room with Kwame Gabriel, the youngster of his brother. On the boy’s blind side, the money was kept hidden, yet on Thursday, Mr. Kwakye realized that the amount he had kept had dropped by 9,500ghc.

Because the kid had left a message confirming his involvement in the crime behind the 500ghc in the bag, he was able to identify the offender.

“Hi daddy, so all this while you have been keeping such huge money in this room whiles we suffer in poverty. I sincerely plead for forgiveness for the reason that I have taken your money.

I know it’s painful but bear with me. I am pleading with you to keep calm because I shall one day present to you more than the money I have taken.

I pray to God to grant you long life for I shall turn your sorrows into joy. The most painful of it all is about how you have refused to give me one cedi all this while to purchase water”. 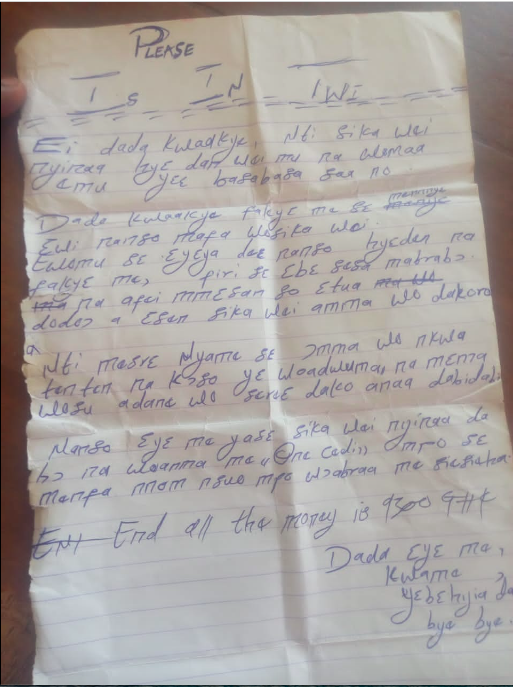 Meanwhile, Mr. Kwakye claimed that Kwame Gabriel would use the 9,500 GHC he had taken to make a connection or exchange that would take him to Dubai and that all efforts to find this boy had been fruitless.

The victim, Mr. Kwakye, has reported the incident to the Assin Fosu District Police and is attempting to have Kwame Gabriel detained so that he can recover his own losses.

The victim, who is currently unable to withstand the pressure from the money’s owner, has sworn to commit suicide.