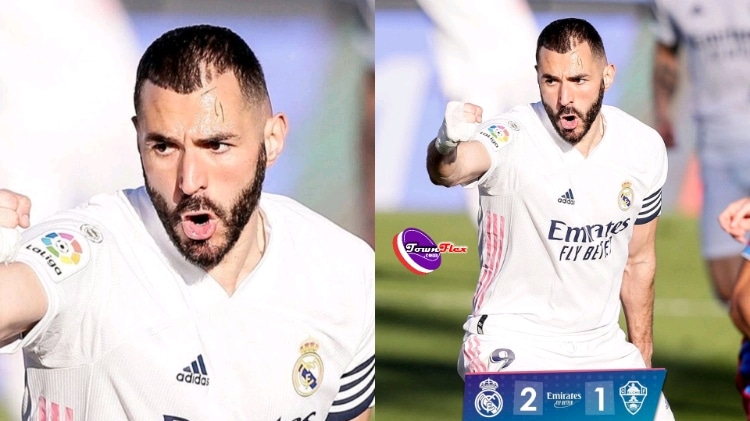 Sergio Ramos made his return from knee injury for Madrid, captaining the side and playing alongside Raphael Varane and Nacho in a back three.

The Real Madrid skipper was entangled in a couple of controversial refereeing calls at the start of the second half.

One saw him appeal for a penalty after going down under Ivan Marcone’s challenge. The second saw him let off the hook by the offside flag after bringing down Guido Carrillo.

The visitors took a surprise lead in the Spanish capital! Morente swings a corner to the edge of the six-yard box and Dani Calvo gets in front of Varane to power a header in off the underside of the crossbar.

A late double from Benzema earns Real Madrid a 2-1 comeback win at home to Elche.

Calvo powered in a header off the underside of the crossbar to give the visitors the lead, but Zidane immediately introduced Kroos and Modric and the change in personnel and tactics paid off.

Modric set up Benzema for a headed equaliser and the Frenchman scored a sublime second in added time.

It was the French striker who had the final say in stoppage time, sweeping the ball past Edgar Badia to win all three points for the hosts.

Real Madrid are now within five points of leaders Atletico Madrid in LaLiga Santander, with Diego Simeone’s side yet to play on Saturday.

Next up for Zidane’s men is a Champions League last-16 second leg with Atalanta on Tuesday, while Elche – still one point above the relegation zone – travel to Sevilla on Wednesday.