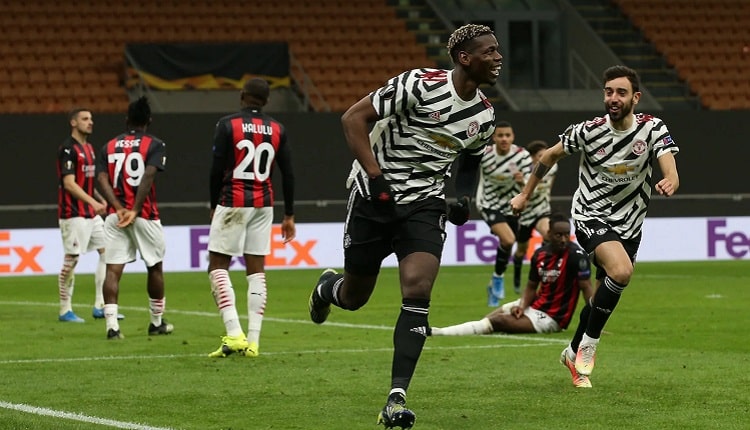 Amad Diallo’s first senior goal for United looked to have secured victory in the first leg at Old Trafford, but Simon Kjaer’s injury-time header sealed a 1-1 draw for Milan at the death – and a valuable away goal.

Manchester United advance to the quarter-finals of the Europa League courtesy of their 1-0 win over Milan this evening, securing a 2-1 aggregate triumph in the tie.

GOALLLLLLLLLLLLLLL!!! POGBA MAKES A DECISIVE IMPACT!!!! 1-0 UNITED!!!! Pogba comes off the bench and puts United ahead on the night and in the tie. Milan is unable to clear their lines from a strike from James that causes havoc in the box.

Fred holds his composure to roll the ball to the Frenchman. There’s still work to do for Pogba, but from a tight angle, he lifts his effort past Donnarumma. A vital strike for the Red Devils.

Zlatan Ibrahimovic had Milan’s best opening, but Dean Henderson was on point to deny the veteran forward. United held out at the end to secure their spot in the last eight of the competition.

Milan have to turn the page following their defeat as they take on Fiorentina in Serie A on the road on Sunday. Manchester United are also in action on Sunday against Leicester City in the quarter-finals of the FA Cup at the King Power Stadium.

Watch below the highlights of tonights game.