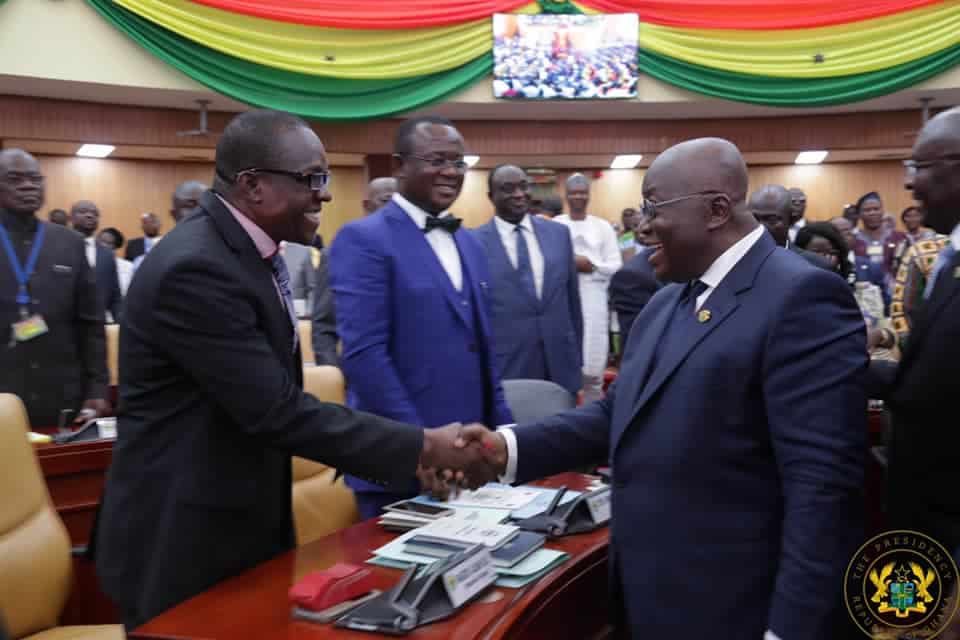 President of the Republic of Ghana, Nana Addo Dankwa Akufo-Addo congratulated his very good friend, Alban Sumana Bagbin for his new post as the newly sworn speaker of parliament.

Alban Bagbin who is the former Member of Parliament for Nadowli Kaleo, in the Upper West Region of north Ghana under the ticket for NDC (National Democratic Congress) was sworn today morning Thursday, January 7, 2021, as the new Speaker Of Parliament for the Eighth Parliament of the Republic of Ghana. Read Here.

He won a chaotic, closely contested secret ballot in the Chamber of Parliament on Thursday against former Speaker, Prof Aaron Mike Oquaye. One of the oldest serving MPs polled 138 votes against his predecessors 136 with one legislator failing to vote.

See This: Mahama Congratulates Alban Bagbin as Speaker Of Parliament

The long dragging process lasted over nine hours which delayed the swearing-in of MPs-elect and the selection process of a Speaker for the 8th Parliament.

President Akufo-Addo in his Inaugural Address as the President Of The Republic of Ghana [which can be read here] he also took a time off to congratulate the newly elected Speaker of Parliament, Rt. Hon. Alban Sumana Kingsford Bagbin who happens to be his good friend and colleague of many years in the Parliament House for his assumption of office as the Speaker of the Eighth Parliament of the 4th Republic.

“I must, at the outset, express my warm congratulations to my good friend and colleague of many years in this House, the Rt. Hon. Alban Sumana Kingsford Bagbin, on his assumption of office as the Speaker of the Eighth Parliament of the 4th Republic. Nearly three decades of devoted service to Parliament by you has culminated in this moment, which has seen your elevation to the third great office of state of our nation,” he said.

He added that they both will be chartering new territory in the governance and politics of the 4th Republic because for the first time in the history of Ghana, a President from one party will be obliged by the exigencies of the moment and the will of the people, to work, in all sincerity and co-operation, with a Speaker of Parliament from another party.

“I am confident that both of us will be guided in our relationship by the supreme interest of our people in ensuring good governance in the ordering of the affairs of state. I want to assure you of my wholehearted determination to work with you to advance the peace, progress and prosperity of the Ghanaian people. Once again, many congratulations to you and the re-elected and new Members of Parliament” – he added