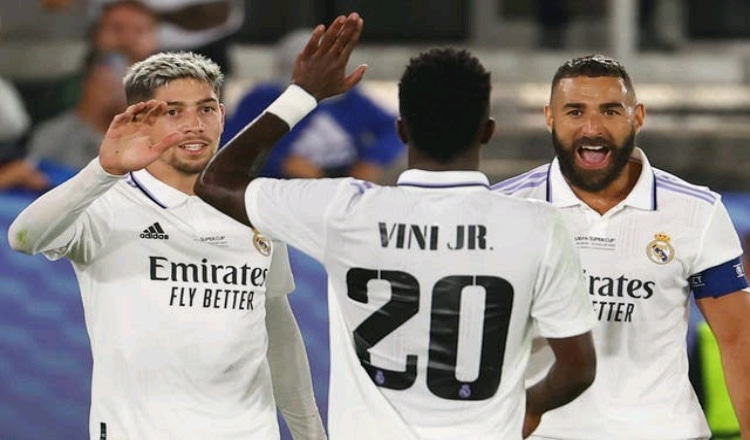 As part of a 2-0 victory over Eintracht Frankfurt in the 2022 UEFA Super Cup, David Alaba and Karim Benzema scored goals for Real Madrid on Wednesday night, giving them their first trophy of the year.

The same starting lineup that Carlo Ancelotti used to defeat Liverpool in the Champions League final back in May was used in Helsinki, and it worked. Los Blancos looked superior to their German opponents.

During the early exchanges, Frankfurt found it difficult to make much progress inside the Real Madrid half, but it was the Germans who created the game’s first genuine opportunity.

Thibault Courtois handled the difficulty of stopping Daichi Kamada’s low strike despite being sent in behind the Los Blancos defense.

Following a fantastic run down the right by Federico Valverde, Madrid answered shortly after his cross was intercepted by Benzema, who then laid it off for an unmarked Vinicius.

Tuta then cleared the ball off the line.
Before the first half ended, Alaba’s goal appeared to calm Madrid’s jitters, which Frankfurt had been able to contain up until that point.

After the break, Ancelotti’s team improved, and Benzema’s strike in the 65th minute dashed any last hope for the German team.

With his goal giving him 324 for the Spanish team—one more than Raul—it was an especially memorable evening for seasoned French attacker Benzema.

In the last minutes, Frankfurt put up a valiant fight, but Madrid was able to dominate and claim their fifth Super Cup victory in as many tries.

Carlo Ancelotti, manager of Real Madrid, told Movistar TV after the game.
“It wasn’t an easy game, they were entrenched in their own half, but we managed to score and we controlled it well afterwards,”

“At the start of the season, you can’t expect the team to be already at 100 percent, but we won and we have started the season well. I believe it can help us achieve better results and winning helps motivate the players.”

Only Cristiano Ronaldo, with 450 goals, has more Real goals than Benzema.

“Now he’s in line for the Ballon d’Or. Is there any doubt? For me, no,” added Ancelotti.
Alaba applauded his players for being

adamant about maintaining their outstanding performance from the previous year.

“We were here to win and to collect the next title… We want to pick up where we left off last season,” Alaba told RTL.
“It’s always nice to score goals – it doesn’t happen so often for me.”

Sebastian Rode, the captain of Frankfurt, expressed regret for his team’s inability to seize their chances.

“Against the Champions League winners, you have to take your chances. We didn’t take ours in the decisive moments,” he told broadcaster DAZN.

The clash, in Helsinki’s Olympic Stadium, was the first time these two sides had met in a European decider since 1960 when Madrid dismantled Frankfurt 7-3 through four goals to Ferenc Puskas and three to Alfredo di Stefano in the European Cup final.