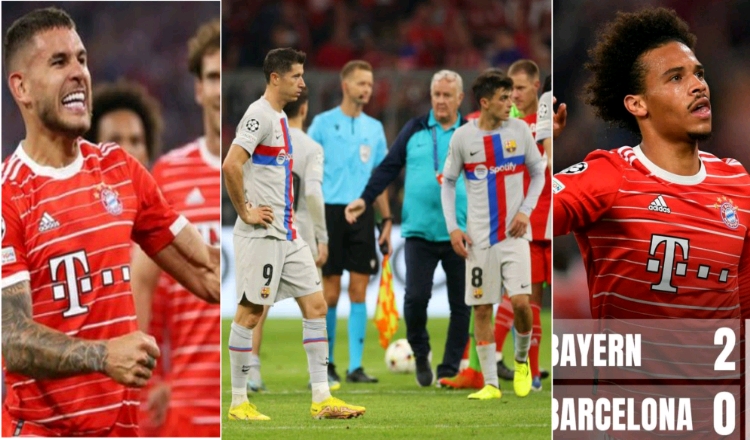 Bayern Munich extended their unbeaten streak in the Champions League group stage to 30 games after a 2-0 victory over Barcelona at the Allianz Arena,

The two clubs are familiar with one another after being in the same group in the previous season.

Similar to the last game, the Germans triumphed once more on Tuesday courtesy to goals from Leroy Sane and Lucas Hernandez in just five minutes.

The fans of Bayern Munich applauded Robert Lewandowski when he returned home after scoring nine goals for his new team, but he was responsible for a long list of missed opportunities as Barcelona missed chance after chance against ruthless Bayern.

Unfortunately for him and Barcelona, he blew two excellent opportunities in the first 20 minutes, missing the first one by shooting over from close range and the second by being rejected by Manuel Neuer.

Noussai Mazraoui, who replaced the injured Benjamin Pavard for Bayern, managed to make a late comeback, but Marc-Andre ter Stegen easily stopped him.

The lost opportunities for the visiting team proved costly as Bayern broke the deadlock in the 50th minute.

To the delight of the home crowd, who exploded in jubilation, Lucas Hernandez managed to elude the grasp of rookie Marcos Alonso and heading home.

Hernandez opened the goal as Alonso appeared to have lost his marker and Ter Stegen had decided to stay on his line.

Five minutes later, Barcelona gave up a second goal before they could gather themselves.

Jamal Musiala’s wonderful pass allowed Sane to glide through the Blaugrana defense, and the former Manchester City player maintained his balance before beating Ter Stegen with a shot.

Barcelona enjoyed a scorching first half, but Bayern dampened all of that fire and flare.

In the 63rd minute, Pedri nearly brought Barcelona back into the game when, after receiving a return pass from Sergio Busquets, he hoisted the ball over an advancing Manuel Neuer, only for it to rebound off the post.

Xavi’s squad attempted to respond, but Pedri hit the post when Lewandowski pushed him through.

That was the best opportunity available, and the hosts managed the game until the final horn.

Barcelona had enough opportunities to defeat Bayern twice, but all of them were wasted, and they paid the price.

The Spanish manager of Barcelona, responded to his team’s loss after the game.

“The process was good, but the result was bad. It was a golden opportunity to win at this stadium, and we leave with a defeat.”

“The difference between us and Bayern is that they don’t forgive in front of goal,” Xavi said while insisting that the result of the game was not a fair reflection of the entire game.