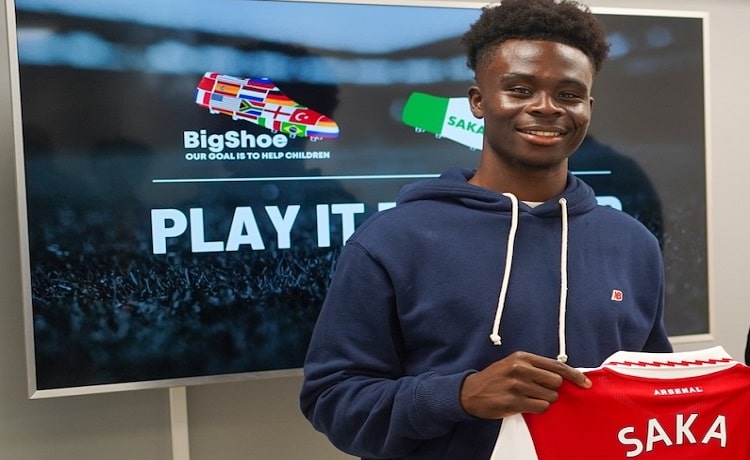 Arsenal and England footballer Bukayo Saka has contributed to the funding of 120 life-changing operations for Nigerian children.

The Englandwinger, Saka, 21, whose both parents were raised in Nigeria before moving to London, where he was born in 2001, collaborated with an NGO called BigShoe to provide quantitative healthcare services to underprivileged children in the country.

The BigShoe is a charity organization that stands for a worldwide growing network of football and sports fans, helping poor children with life changing medical operations and more.

According to reports, the operations were carried out last month, in mid-October and it all turned out to be a success for the 120 children as they got treated.

A team of five doctors performed the surgeries.

Saka’s actions are in response to public concern in Nigeria about diseases such as inguinal hernias and brain tumors.

Speaking on the subject, the 21-year-old, who is currently preparing for his first World Cup, said he’s “connected” to his roots in a video circulated by Goal.com’s Arsenal correspondent, Charles Watts.

“For me, it is very important to use my abilities to have a positive impact where I can and I have to say a big thank you to the whole BigShoe team for making this possible.

“For me it is important that every child has the same opportunity to achieve their dreams.

“If I can do anything to help then I really want to do this, it was very important to me.

“It makes me happy when I can see the kids happy and their parents happy.

“I want to do more and more and help as many children as I can.

Great stuff from @BukayoSaka87, who has teamed up with BigShoe to cover 120 life-changing operations for children in Kano, Nigeria.

Saka: "I feel blessed to be in a position where I can contribute to making the children's lives better through these surgeries." pic.twitter.com/MfEMpUomfL