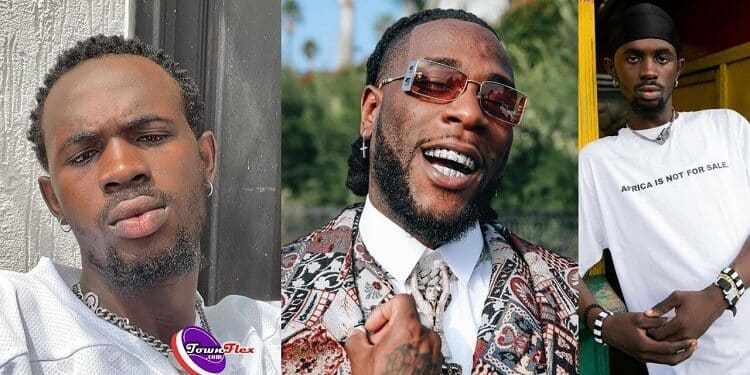 Grammy Award-winning Nigerian singer, and songwriter, Burna Boy has announced that Ghanaian young rapper, Black Sherif will be joining him on his tours, as he asked fans to learn how to sing their new song ‘Second Sermon Remix”.

The Nigerian star, Damini Ebunoluwa Ogulu aka Burna Boy fell in love with Black Sherif and his Second Sermon freestyle from the very moment he released it some few months ago.

Burna Boy has however shared a series of videos of himself jamming to the song to show how much he really likes the song and wanted to jump on it, a time came he shared a video that confirmed he has linked up with the Ghanaian rapper Sherif as they were both sighted in Burna’s car together playing the unreleased song.

The song Second Sermon Remix by Black Sherif featuring Burna Boy has finally been officially released onto all digital platforms on Wednesday, December 8, 2021.

Burna Boy took to his Instagram Stories and made a post stating that Black Sherif will be joining him on his tours, and also sent a word of warning to his fans who will love to attend his shows on what to do.

In the post, Burna warned his fans to make sure they learn the Sermon Remix song word for word before they come to his shows.

@BLACKSHERIF_ IS COMING ON TOUR WITH ME. SECOND SERMON REMIX FEATURING ME (BURNA BOY0 OUT NOW!! YOU BETTER LEARN THE WHOLE SONG BEFORE COMING TO ANY OF MY SHOWS. YES THAT INCLUDES TWI ()A GHANAIAN LANGUAGE0 PARTS THANKS. LOVE.. DAMINI.

The Remix Version of Black Sherif’s Second Sermon song that features Burna Boy upon its release has caused a lot of controversies as many decided to drag Sherif saying the remix is a wack song, and that he was supposed to maintain the original song and rather work with Burna Boy on a different project instead.

Well, that is what others think, who knows, you might not also feel the same way, you will have to be the judge yourself. Click Here To Listen To The Song.