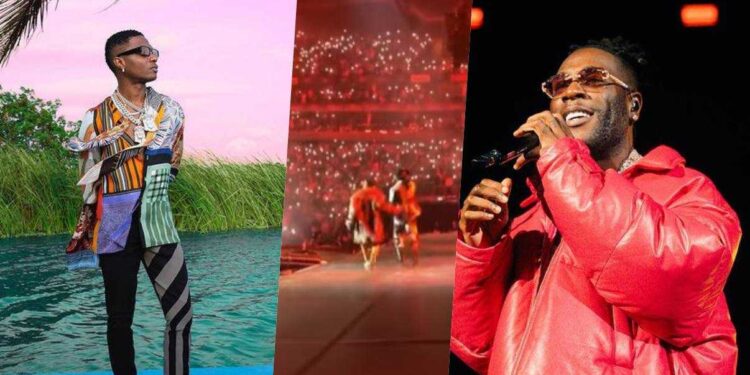 Thousands of fans were much excited and got thrilled as Wizkid introduced his fellow Nigerian act, Burna Boy out on stage to perform at his Made In London (MIL) tour at London O2 Arena.

Wizkid thrilled fans at O2 Arena, which has a capacity to hold 20,000 he sold out the venue and his made in Lagos tour was a successful one.

Wizkid did not do it alone, he could but, he had a couple of musician friends who joined him to make the show climax, Wizkid after the show got more love from fans and fellow musicians from America, etc congratulating him for the outstanding event he organized.

The MIL tour which reportedly garnered over N5bn was in fact a sold-out show for the Grammy award-winning singer who recently bagged a nomination for next year’s edition of the award.

Well, Check out in the video the moment he brought out on stage his fellow Nigerian and Grammy Award-winning Nigerian singer, Burna Boy as they both performed to the cheering crowd.