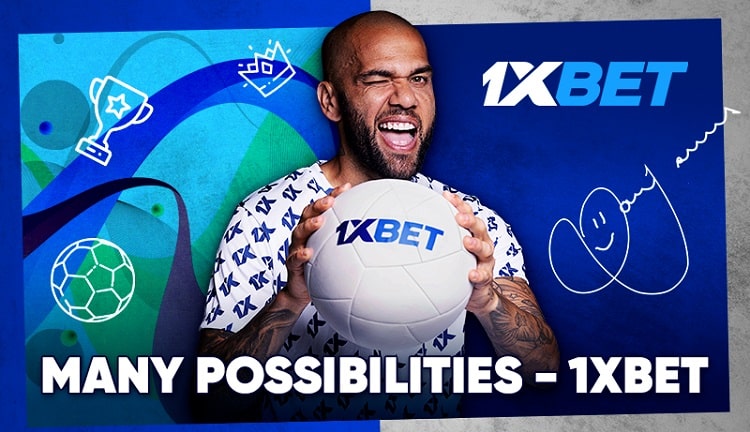 World-famous Brazilian footballer Dani Alves became the global brand ambassador of betting company 1xBet. The parties have signed an agreement until 2024, marking the start of a long and successful partnership.

“You know, 1xBet and I are very similar. They, like me, strive to be the best and have the highest goals. I have managed to win more than 40 trophies in my career – I believe our joint triumphs with 1xBet will also bring many new accomplishments.

I am very happy to become the ambassador of such a top brand. There is a lot of excitement and pleasant surprises ahead. Don’t miss it!” – Dani Alves stated.

“I believe that our partnership with Dani will be as successful as his playing career“ – this is what a representative of 1xBet commented about the start of cooperation with the footballer.

The Brazilian has won 43 trophies in over 20 years in the game, making him the world’s most-awarded footballer. He won many titles playing for Barcelona and PSG, which are partnered with 1xBet. Also, Dani Alves has successfully played for famous teams such as Juventus, Sevilla, São Paulo, and, of course, the Brazilian national team. Last summer, he joined the Mexican club Pumas. Now at age 39, he’s still playing at a high level, so there are more triumphs to come!

The bookmaker has prepared a lot of amazing offers and events for its customers and fans of Dani. By the way, he has tens of millions of supporters! Only on Instagram the athlete has over 37 million subscribers, that’s over double the population of Bahia, the Brazilian state where he was born.

Follow Dani Alves’ and bookmakers’ social networks and take part in the promos and activations! Many possibilities — 1xBet!

1xBet is a world-famous betting company with over 15 years of experience. Brand customers can bet on thousands of events in over 60 sports. In addition, the company’s website and app are available in more than 60 languages.

Apart from Barcelona and PSG, 1xBet also cooperates with other well-known sports clubs and organizations, for example – Italian Serie A and CAF. In addition, 1xBet’s partner portfolio includes popular esports organizations such as Team Spirit, K23, Tundra Esports, OG Esports and MiBR. The bookmaker has repeatedly become a nominee and winner of prestigious awards, including IGA, SBC, G2E Asia, EGR Nordics Awards and others.