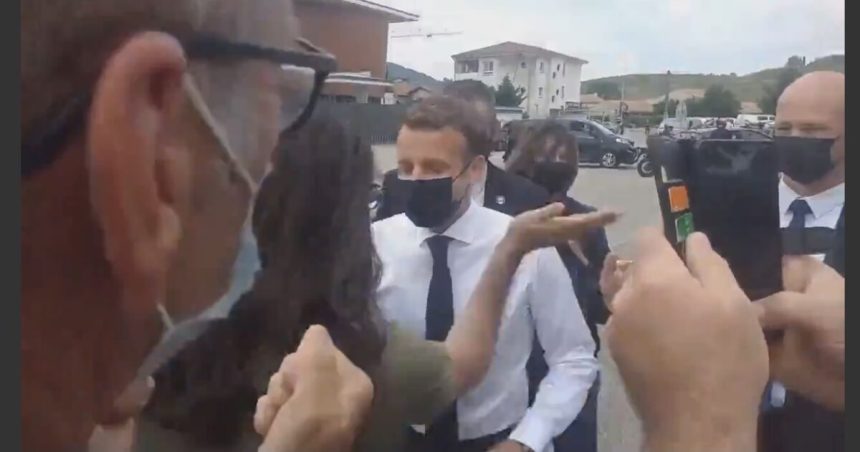 In a  viral online video making rounds on the internet, an unidentified lady can be seen publicly slapping French President Emmanuel Macron in the face.

The lady who emerged from the crowd and slapped President Macron was caught on camera before being subdued by his bodyguards.

The video of Macron being struck by the supposed angry woman has been circulating on social media and gathering a lot of reactions. Meanwhile, according to reports, the incident occurred on Sunday, November 20, 2022.

The physical abuse of the French president in front of the public has occurred before. The first incident occurred in June 2021 when a man named Damien Tarel slapped him while he was on a tour in southern France.

In the 2021 viral video, Macron was seen reaching out to welcome the man and getting slapped in the face.

Additionally, he was heard shouting, “Montjoie Saint Denis” which was the French army’s battle cry when the nation was still a monarchy.

Watch The Video Below:

Meanwhile, in other news, the carrying of eggs in public has been prohibited for Patrick Thelwell, the student who was detained for allegedly throwing eggs at King Charles and Queen consort Camilla while they were on a walkabout in York.

When King Charles and Queen Camilla visited the historic city to see the inauguration of a statue of Charles’s mother, the Late Queen Elizabeth II, which had been mounted since her passing on September 8, it was reportedly alleged that a 24-year-old student thrown eggs……..READ MORE