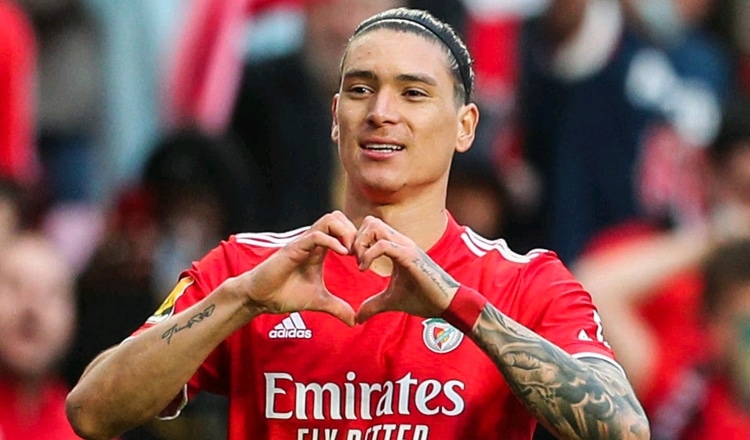 Liverpool striker Darwin Nunez has been named 2021/22 Primeira Liga Player of the Year after an outstanding performances for Benfica.

The 22-year-old has now become the second successive Uruguayan player to be named the standout performer in the Portuguese top-flight after ex-Reds defender Sebastian Coates.

The 22-year-old scored an impressive 26 goals and 4 assists in 28 Primeira Liga appearances reaching 34 in 41 across all competitions including six in the Champions League during the 2021/22 season.

Darwin Nunez’s individual efforts have been recognised despite his side ending the campaign 17 points behind title winners Porto and has now join past winners of the Liga Portugal award include Hulk, David Luiz, Nemanja Matic, Bruno Fernandes and Jonas.

Nunez €100m move to Liverpool has made the Uruguayan the most expensive ever player including various add-ons when triggered. The fans expert their new signing to effectively replace the output of Sadio Mané on the pitch.

Fans love to speculate about how thier new signings are going to perform in their debut campaign. This is particularly true for strikers, and this season is to be a battle for the fittest with Erling Halaand also involved.

Countryman and former Premier League forward Diego Forlan who won the Golden Ball as the best player at the 2010 World Cup has backed Nunez to be a success at Liverpool and also complement Jurgen Klopp.

“What can Darwin Nunez bring to Liverpool? Obviously he’s still a young player, he’s still growing. He has a great set of skills, he scored a lot of goals at Benfica,” Forlan told 90min ES.

“I believe that one of the things he can bring is, without a doubt, goals. Then, as time goes on, he’ll keep growing on the technical aspect. He will get to know his abilities better and he will develop them more and more too, while also gaining experience.”

“He’s going to a team with an amazing manager that knows football very well…how to attack the space, how to use his players and how to get the best out of them”.

“He’s going to a team with a coach that is one of the top three in Europe and the world. To be honest, it’s an incredible team to play in, let’s hope he can take advantage of that and that he can keep growing as he been lately”.

“He has taken big steps and, hopefully, our national team will be able to take advantage of that as well.”

Excitement is now growing over Nunez after winning 2021/22 Primeira Liga Player of the Year awards, some members of Jurgen Klopp’s first-team Liverpool squad are eagerly awaiting the Uruguayan forward’s first outing for the club.

“I think obviously Darwin, we played against and saw him first hand and I think everything that we saw in those games has reminded me a little bit of Luis [Diaz] when we played against him when he was at Porto“. Alex Oxlade-Chamberlain told liverpoolfc.com

“He’s that sort of a player that you know what you are going to get from – the athleticism, the speed, the strength, the power – and it was the same with him“.

“I remember having to chase Luis back at Anfield at one point and he made me stick it into fifth gear and then try to find sixth to keep up with him! You sort of remember those things and when he walked through the door that was the first thing I remembered – don’t try to get in a race with him if I’m expecting to win!

“I think Darwin would be the same. I think Virgil said first hand and Ibou said as well how quick and strong he was. I think he had that confidence and swagger about him as well and I think as a striker, as a forward player, you sort of need to have that confidence to go and do good things and lead the team from up there.”