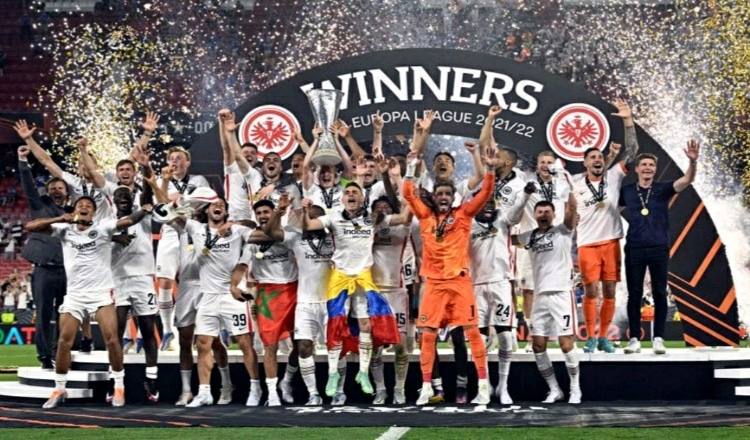 Eintracht Frankfurt beat Rangers 5-4 on penalties to win the UEFA Europa League after 1-1 scoreline at the end of the extra time in Seville on Wednesday night.

Rangers fans left heartbroken after their defeat on Wednesday and the 50-year wait for a second European trophy continues.

Rangers took the lead in the 57mins after a mistake from the Frankfurt defender which saw Joe Aribo scored the opening goal of the night.

A calm finish from the Rangers striker in front of the 18,000 Scots supporters inside the Ramon Sanchez-Pizjuan Stadium had dared to dream that this was their night.

Colombian striker Rafael Santos Borré scored the equaliser for Frankfurt in the 69 mins after a mistake from Rangers defence line.

The game was led into the 30 mins of extra time in Seville after 90 mins.

A golden chance to win the cup for Rangers fell to Ryan Kent after 118 minutes. Frankfurt goalkeeper Trapp was the German hero after a brilliant save to deny Rangers a victory.

After 120 minutes of stamina-sapping tension the Europa League final was decided by the heartbreaking penalties.

The German goalkeeper Kevin Trapp was again the hero for his side after saving Rangers fourth spot-kick by Aaron Ramsey.

Eintracht Frankfurt and Colombian international Rafael Borre who cancelled out Joe Aribo’s opener in normal time again scored the winner after capitalising on his goalkeepers effort.

Eintracht Frankfurt has now won their second European trophy after the 1980 UEFA Cup.

The German club are now the third team to win the Europa League without losing a game, Eintracht’s Oliver Glasner becomes the second Austrian coach to win a European trophy after Ernst Happel led Hamburg to the European Cup in 1983.

The tears of goalkeeper Allan McGregor spoke for the 100,000 fans who flocked to Seville in a quest for history.