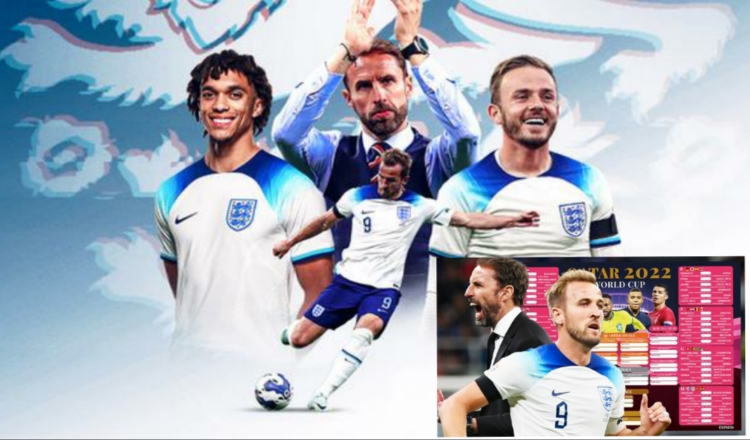 Gareth Southgate has announced his 26-man squad that will be traveling to the Gulf next week, with the Three Lions’ Group B campaign beginning against Iran on Monday, November 21.

The 2022 FIFA World Cup is scheduled to be the 22nd running of the FIFA World Cup competition, the quadrennial international men’s football championship contested by the senior national teams of the member associations of FIFA.

It is scheduled to take place in Qatar from the 20th of November to the 18th of December 2022.

The World Cup campaign of Gareth Southgate’s team begins in Qatar on Monday, November 21 as his side face Iran on Monday at 1pm.

England has been drawn in Group B alongside Iran, USA, and Wales

Check below the complete 2022 England World Cup Squad of players selected from clubs around the globe with some being your favorites, to see who made it to the competition and who is ruled out.

Southgate was asked how it felt to leave out several players who had recently been regulars in his group, particularly Tammy Abraham.

“It’s really tough and there’s not many situations harder than that in football and I’m very conscious of that.” “Tammy has had a poor run of scoring form at the wrong time and it’s not a case where we are three-four weeks away from the final and first match.”
“We’re 10 days away and form could be more important. We don’t really know where the players are until we see them face-to-face.”

Southgate on players being out of form

“Form can be temporary. We’ve got to see very quickly how people are. There’s also opportunity here because there are players who are in good form who could push their way into the starting XI.” “We’re not steadfast on an XI. There are some players we’re pretty certain will be in the starting team but there a number of positions we want to have a look at. We don’t know what the impact of the schedule will be.”

The boss was asked if he knows his best team?

“We’ve got to be fluid. You just don’t know who you have. We can’t recruit like you would at club to a set system.”
“There are probably only a couple of teams in the league that have been able to stick with a preferred style of play and system this year. We’ve always had that flexibility and we think it’s important.”