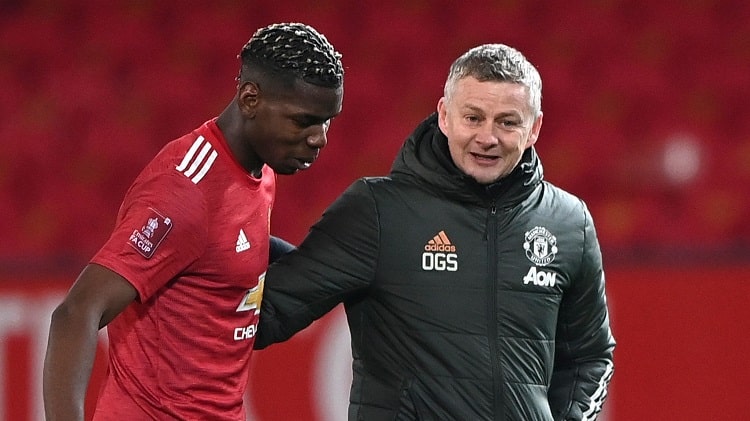 MANCHESTER UNITED have held talks with a new ‘happy’ Paul Pogba over his future at Old Trafford.

The Frenchman has 16 months left on his deal and United would need to sell this summer to get a decent price for their £89million record signing.

Paul Pogba could now stay at Man Utd. Pogba and his agent Mino Raiola have talked publicly in the past about his desire to leave for a new challenge.

But manager Ole Gunnar Solskjaer is now getting the best out of the player, giving the club some optimism that they have turned a corner and the 27-year-old midfielder could commit his future to them.

Solskjaer said: “Speculation about Paul is always going to be there, we’ve got a good, open dialogue with Paul so what we talk about and how we see that situation remains between us.

“I’m just happy he’s focused and playing really well and he’s happy within himself and that’s important — you can see Paul enjoying football himself with a red shirt on.

“Paul is a Man United player through and through.

“He’s been here in two spells, he came as a kid he’s learnt about the history of the club, the passion of the club, he wants to do the best for Man United when he’s here.

“I think we’ve seen that he really cares for his team and he’s trying to be as successful as everyone else.”

Injury wrecked last season for Pogba and he had a slow start to this one after catching Covid-19.

But his form of late saw him voted the club’s player of the month for January by the fans, helping to inspire a title tilt as they prepare to host Everton on Saturday.

“I have said this many a time that he had a bad season last season with injuries and he had Covid this season and an injury but he really works hard and is playing in a team that plays well and he’s a big inspiration for everyone.

“He always has a big smile… well not always a big smile because in training yesterday when his team lost you can see how that affects him and he wasn’t happy.

“But today is a new day and he is ready to go again.”

Solskjaer said: “I think it’s a sign of a Man United player that takes on the challenge of competition because if you can’t deal with competition and you want to be successful you’re at the wrong place.

“Nobody is guaranteed a place in the team like a season-ticket card.

“Here you’ve got to perform to be part of the success of Man United and I’ve been part of it myself with strikers coming in and you’ve just got to take the challenge head on.

“We’ve signed players that we believe in but that’s also kicked some of the other players up the backside to perform and make sure they keep performing.”

Pogba joined United’s youth academy in 2009 but left the club for Juventus after a contract dispute with then boss Sir Alex Ferguson in 2012.

Pogba is desperate to win at Old Trafford.

He won four Scudettos in Italy before returning to Old Trafford in a then world record £89m move in 2016.

He signed a five-year contract with the option of a further year which was triggered by the club and he earns £290,000 a week.

He has attracted strong interest from Real Madrid and his former club Juventus.

United’s £180m asking price in the summer of 2019 scuppered a potential move to Real’s Bernabeu.