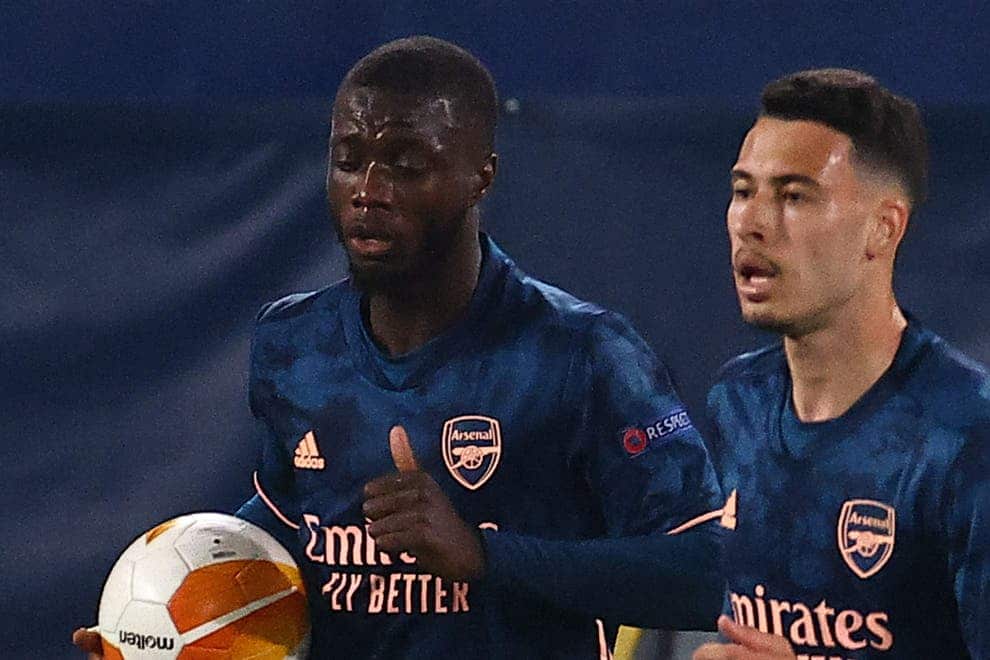 Nicolas Pepe’s second-half penalty after a foul on Bukayo Saka gives the Gunners every chance of progressing through to next month’s Gdansk showpiece.

Nicolas Pepe struck a potentially crucial away goal from the penalty spot after efforts from Manu Trigueros and Raul Albiol and a red card for Dani Ceballos had left the Gunners with a mountain to climb against opponents managed by their former boss Unai Emery.

Arsenal, who had Martin Odegaard back in the starting lineup, fell behind with only four minutes and 39 seconds on the clock at Estadio de la Ceramica, with Samuel Chukwueze looking to isolate makeshift left-back Granit Xhaka.

Ceballos duly went over to assist, only for the ball to fall loose and Trigueros – sent off during Sunday’s LaLiga defeat by Barcelona for a poor challenge on Lionel Messi – to dispatch a firm low strike beyond the grasp of Bernd Leno.

Matters got worse for Mikel Arteta’s men just before the half-hour mark, however, when Gerard Moreno rose unmarked to flick on Dani Parejo’s corner from the left and experienced defender Albiol stole in to turn home at the back post.

Arsenal then looked set to get the chance to reduce the deficit from the spot after Pepe was tripped by the dangling leg of Tottenham loanee Juan Foyth.

However, the decision from Portuguese referee Artur Manuel Soares Dias to award a penalty was correctly overturned after a VAR check on a clear handball from Pepe.

Arsenal made a purposeful start to the second half, but an already tough task appeared to get a whole lot harder when Ceballos – walking a tightrope after a foolish foul at the start of the second half that followed a first-half caution for pulling back the marauding Foyth – received a second yellow card for standing on the foot of a sliding Parejo.

Leno made a crucial fingertip save to deny Villarreal’s top scorer Moreno and the Gunners appeared more balanced following the introduction of Gabriel Martinelli, with Pepe scoring a potentially pivotal away goal from 12 yards after the dangerous Saka had been tripped by Trigueros.

See This: Manchester City came from behind to win this first leg 2-1

The match became 10 vs 10 with 10 minutes left to play, with former Spurs and Watford midfielder Etienne Capoue shown a second yellow as he was stretchered off after flying in recklessly on Saka.

Late substitute Pierre-Emerick Aubameyang – back in the squad after recovering from malaria – then had a chance to level the tie in stoppage time, but his shot was parried behind by Geronimo Rulli.

Mikel Arteta reaction
“We didn’t want to come here and lose, obviously, but after the way the game developed and being 2-0 down and 10 men you have to take the result. If you have to lose this is the best result we could have, but two different halves.

“We started to be us and in the first half there were so many moments that we weren’t us. We weren’t clear, we disorganised ourselves, we started to chase, we weren’t precise and we didn’t have enough threat and desire to threaten the opponents’ box.

“I am confident, we have a chance to win that’s for sure.”

Bukayo Saka reaction
“There are a lot of positives, which all came in the second half, but it is the semi-final of the Europa League, to start the game like this it is impossible to have a chance of scoring. We didn’t create anything, we lost every duel, we were passive. It was frustrating,” Saka told BT Sport.

“I am happy we picked ourselves up in the second half. We got a chance and managed to score, so we have given ourselves a chance at the Emirates.

“We definitely showed that we are better than them, even with 10 men we were dominating them. It is up to us, it is always up to us, we have a team full of quality players and when we play properly we can compete with anyone and we showed that today.”

All to play for next week then, when former Arsenal manager Unai Emery makes his return to Emirates Stadium.