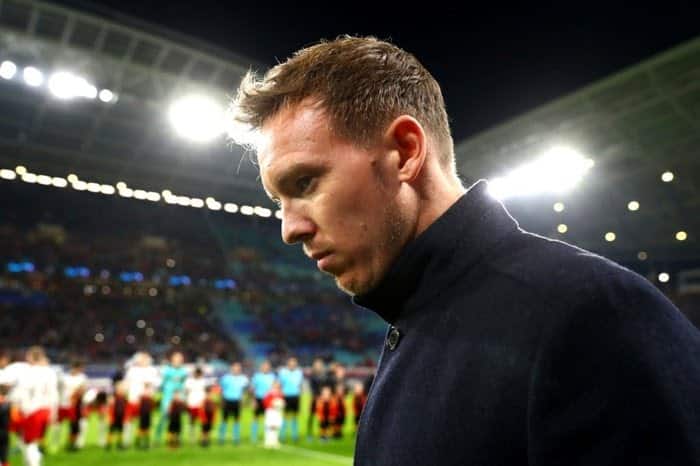 According to Falk, Nagelsmann has agreed to take over and the two clubs are discussing a compensation package.

He stabilised them before guiding to the Champions League for the first time in their history. Naglesmann oversaw over 100 Bundesliga games in charge of Hoffenheim before joining RB Leipzig in 2019.

Since taking over Leipzig, Naglesmann has guided them to consecutive top four finishes as well as further progression in the Champions League.

He took RB Leipzig to last season’s Champions League semi-finals and they are on course to finish second behind Bayern in the Bundesliga this campaign.

However, his most impressive attributes is his ability to create an exciting, attractive style of play which wins admirers across Europe.

His back three system has got the best out of the defenders- in particular the wing backs. He is a great motivator and the players clearly enjoy playing for him.

Nagelsmann will succeed Hansi Flick, who last week asked Bayern to terminate his contract at the end of the season after several disagreements with sporting director Hasan Salihamidzic.

The clubs must now agree a fee, with Leipzig demanding €25m.

Julian Nagelsmann agrees to become Bayern Munich’s new manager, according to Sky in Germany; RB Leizpig want record €25m fee for the 33-year-old, who had been linked with replacing Jose Mourinho at Tottenham

Julian Nagelsmann has agreed personal terms with Bayern Munich but RB Leipzig are demanding a world-record fee for their manager, according to Sky in Germany.

Naglesmann is always willing to give youth an opportunity and certainly he ticks plenty of Bayern Munich’s boxes. He is a vibrant, talented coach who knows exactly what he wants and how he wants to play.

However, the stakes will now increase for Naglesmann as he potentially takes on the biggest job in German club football. Many have tried and plenty have succeed but some have failed. This will be tough but Naglesmann will relish the challenge ahead.

Bayern Munich live and breath for trophies and Naglesmann must deliver otherwise the net will close in very quickly. He is capable of bringing success and certainly this is a real coup for Bayern Munich.

Joachim Low will leave his position as manager of the Germany national team at the end of this summer’s European Championship and Flick has been one of the names linked with becoming his successor.