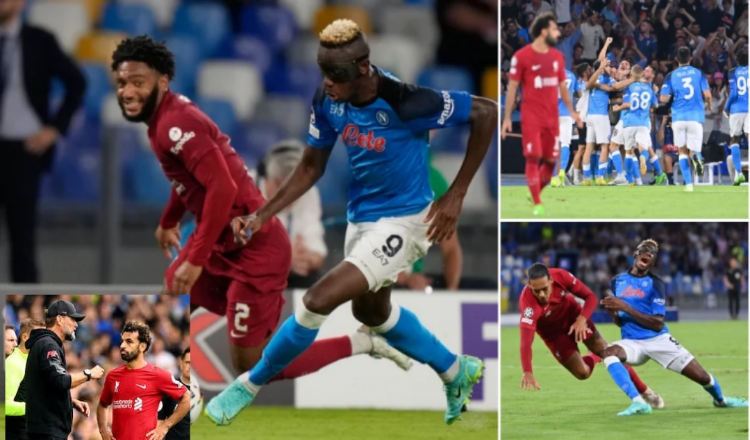 Liverpool’s Champions League run got off to a bad start with a 4-1 road loss to Napoli.

Andy Robertson, James Milner, and Roberto Firmino were the three replacements from the Merseyside derby on Saturday as Jurgen Klopp sought for experience in the first Champions League match.

Piotr Zielinski scored the first goal for the home team in the fifth minute from the penalty spot before adding another goal in the second half.

After the break, Luis Diaz attempted to salvage a point for the Reds, but his attempt to mount a comeback was unsuccessful.

That was terrible, but it could have been worse after Van Dijk fouled Osimhen ten minutes later, resulting in a penalty, which Alisson saved to prevent Liverpool from facing a difficult uphill battle.

It was bad enough for Klopp to switch to a 4-2-3-1 system with Salah in the center, Firmino to behind, Elliott to his left, and Fabinho in midfield.

It is difficult to come up with any that even comes close to the unwelcome honor of having caused one of Liverpool’s biggest European losses.

And then, a rare but essential apology from Klopp to the visiting supporters.

After Liverpool suffered their joint-worst defeat in the Champions League, Jurgen Klopp made a stunning admission, claiming that his team “need to reinvent ourselves.”

“[It’s] not that difficult to explain when you saw the game,” Klopp post-match to BT Sport.

“Napoli played a really good game and we didn’t. That’s the first explanation.”

The boss admitted that the second and third goals were “served on a plate” and that his side were “never really in the game.”

“[We were] not compact defensively or offensively,” he said. “Until Thiago entered the pitch I can’t remember one counter-pressing situation. The answer for this is we were just too wide.”

Klopp then made a big admission about the bigger picture of the squad and the club:

“It looks like we need to reinvent ourselves. There’s a lot of things lacking.”

“We have to try to find a set up to be much better in pretty much everything.”