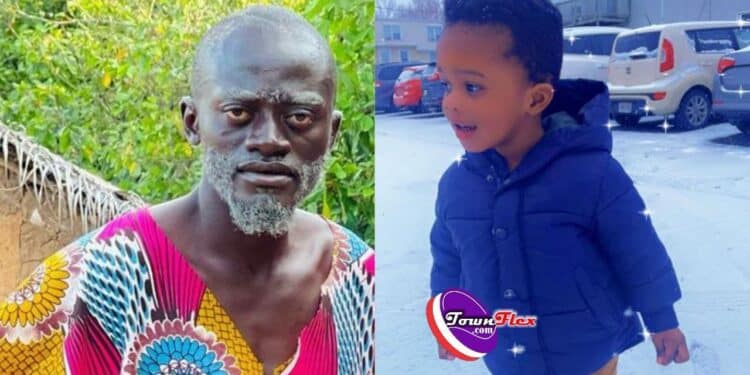 The young handsome boy stays outside the country (Ghana), in the video shared by the Kumawood comic actor it showed that his son has a fair complexion and that has sparked a lot of talks on social media.

Social media users after sighting the video and photo shared by the actor were confused as they tried comparing and trying to figure out why the father is dark in complexion whiles the son has a fair complexion.

It has already been alleged that Kwadwo Nkansah Lilwin, has married another lady who leaves outside Ghana and has kids with her after he broke up with his wife, Patricia Afriyie 4 years after they got married back in 2012.

Sharing the post that saw his son playing in the snow in a video and photo, he captioned it by writing “Adom ooo Adom Alakwa ❤️❤️❤️🙏🙏🙏”

In other news, Popular Nigerian actor, entrepreneur, and serial investor. Chinedu Ikedieze, MFR, better known by many as Aki shares adorable photograph of his son with reactions from social media users.

The Actor who has hidden the face of his son away from the media for a very long time has finally been spotted on social media as he shows of the face of his adorable and handsome-looking son for the first time ever.

The photo which is causing a lot of traffic on social media was shared by a Twitter user with the username, @Tweetsby_Aki on his page which happens to be one of the several fan pages for the actor. Click Here To See Picture.