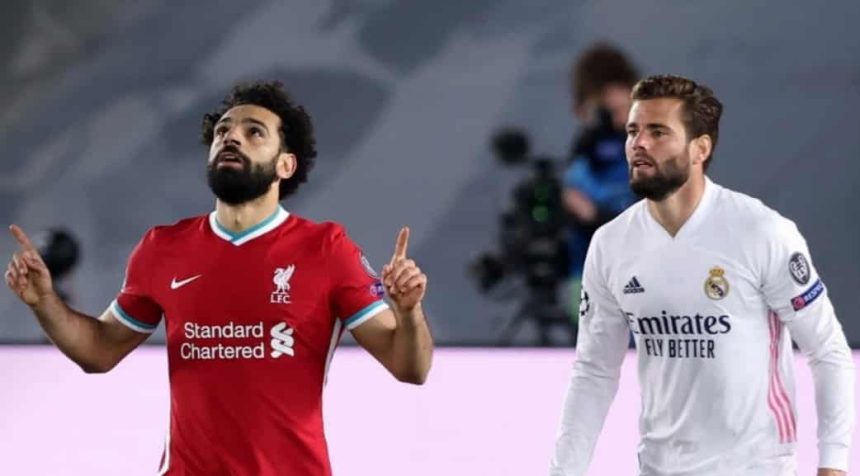 Different venue. Same outcome. Three years on from his most painful Liverpool experience at the hands of Zinedine Zidane in the Champions League, Jurgen Klopp witnessed a virtual action replay as Vinicius Jr’s double inspired the Spanish side to a 3-1 victory.

Mohamed Salah lasted the 90 minutes this time, and predictably scored what may yet prove a critical away goal.

But defensive disorder contributed to a sobering night, an especially dire first half ensuring Zidane’s side edged closer to the semi-final.

Liverpool’s season – and possible involvement in next year’s Champions League – now rests on next week’s second leg. Another famous Anfield comeback is needed to reach the Champions League semi-final, this time without their 12th man.

As in the 2018 final, they were culpable for their downfall, defensive errors costing all three of Real’s goals. It could have been far worse. Klopp will review the game unsure what was most frustrating – that Liverpool started to appallingly, or that having worked their way into a more tolerable position they lamely conceded a third.

Klopp may not have wanted reminders of the last meeting with Real. During a grisly first half, he could not escape them.

Maybe the initial glimpse of those iconic white shirts sent his players into post-traumatic stress as they replayed the calamitous defensive errors which gifted the Spaniards the European Cup in Kiev three years ago.

Klopp said he was not thinking about revenge for that torturous evening. Evidently his players took those comments too literally. The game began akin to a surrender, Liverpool a shadow of the side which recently threatened a revival.

The recollections to Kiev extended beyond Real’s on-field class. For all their success and grandeur, has any team in recent European history ever been so underestimated as the multi-Champions League winning Real Madrid side?

In the build-up to the 2018 final, there was so much focus on the pain Liverpool’s strikeforce was going to inflict on a side apparently past its peak, few seemed to consider the possibility that the established superstars would put the novices in their place.

There was a similar tone of disrespect to Zidane’s injury hit side pre-match here, if not within the Liverpool party, certainly among neutrals. Dare one say it even manifested itself in Klopp’s team selection?

As in that Ukrainian final, Real were too savvy, too experienced, and too comfortable in their own skin to buy into the idea they were going to be dominated.

Alisson had not had much to do until then, but he knew employment was coming his way given the ease with which Madrid were moving back to front. Only a couple of generous penalty decisions in the Liverpool defences favour spared them until that point.

Alexander-Arnold was culpable for the second, misdirecting a header to Marco Asensio, who accepted the present with the same aplomb as Karim Benzema when assisted by Loris Karius. Liverpool’s performance to that point was shambolic.

Klopp and his backroom staff could only look on in disbelief, consoled by the fact they could not play any worse. They had barely strung a pass for 45 minutes, making their complaints about a foul by Lucas Vazquez in the build-up to Real’s second ring hollow.

It took five minute for Liverpool to claim an away goal, Diogo Jota’s first meaningful contribution leading a ricocheted shot falling to Salah. He was composed enough to finish. Finally, Liverpool looked like Liverpool and Real’s defence was nervous as Alexander-Arnold and Robertson began attacking wide areas.

Jota could have equalised on 62 minutes when he instead tried to tee up Mane. But now the game was frantically end-to-end, Klopp having to calculate whether escaping with a narrow defeat was preferable to risking further punishment for an equaliser.

It is not in Klopp’s nature to hold back, and Liverpool in the gung-ho atmosphere his side suffered again on 65 minutes.

This time Alisson took the Karius role, failing to keep out what for him was a routine save from Vinicius.

Zidane then had the luxury of trying to restore order with a defensive substitution. Klopp made a final attempt to restore chaos by sacrificing a centre-back and sending on Shaqiri and Firmino. That smacked of desperation and there was no way through.

Unlike in Kiev, there is a chance for a reaction next week. They will need to produce considerably better than this.

About as poor a first-half performance I’ve seen from a Klopp side. Real Madrid were slickly superior, Liverpool made too many errors, their high line cruelly exposed once again by Kroos’s passes and though they got one back to give them some hope, the third after more aberrant, sloppy defending, means they’ve got an Everest to scale next week. It’s one thing doing it at a packed Anfield with all your best players, with this defence in an empty stadium against a team with such a stellar midfield, it looks like a long shot.