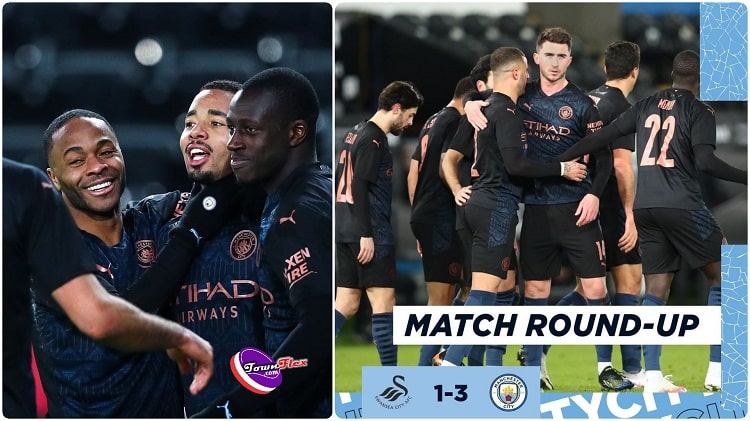 Kyle Walker opens the scoring with a cross that wriggled home at the far post; Raheem Sterling and Gabriel Jesus added a quickfire double after half-time;

Manchester City cruised into the FA Cup quarter-finals with a 3-1 win at Swansea – their 15th successive victory in all competitions, which is a new record for a top-flight team in English football history.

Despite a raft of changes, it was a classic Man City performance as they dominated the cup encounter, registering 73.6 per cent possession and 17 shots.

But they took the lead in strange circumstances as Kyle Walker’s cross snuck home at the back post on the 30-minute mark.

Swansea defended well in the first period and had their own sights of goal – Jay Fulton heading just wide immediately after the goal – but were sucker-punched with a Man City double inside five second-half minutes.

Raheem Sterling (47) was left unmarked as he slotted home before Gabriel Jesus (50) added the third shortly after for his fourth goal in six games and second in the FA Cup this season.

Morgan Whittaker’s first Swansea goal was a consolation, complete with a fine finish, but it was not enough to inspire a comeback against the Premier League leaders.

The victory brought up Pep Guardiola’s 200th win as Man City manager, with his side now unbeaten in 22 games in all competitions. They will be part of the quarter-final draw on Thursday evening.

Kyle Walker celebrates scoring Manchester City’s opening goal with Bernardo Silva
The warning signs from Man City were there inside two minutes, Jesus fired an effort straight into Freddie Woodman’s hands and it was not long before they started to rack up the chances.

Aymeric Laporte then nodded a corner wide at the back post. Woodman was again in action when Ferran Torres lifted an effort his way from the left of the area, but it was saved well by the Swansea stopper.