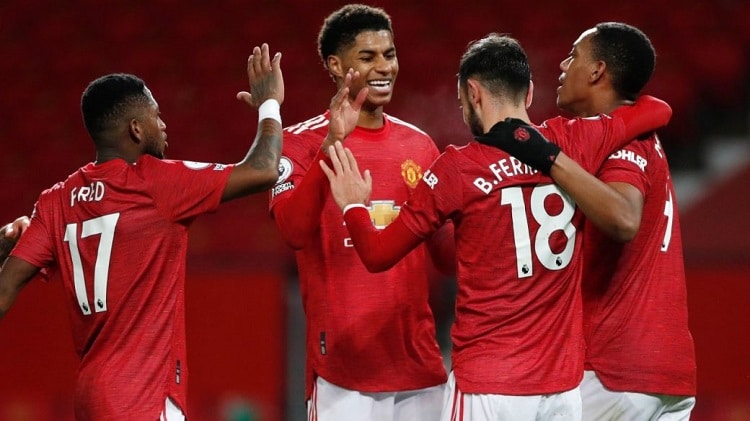 Manchester United crashed Southampton 9-0 win as seven separate players got on the scoresheet.

Congrats to Man United as One man down after two minutes.

They worked hard and did not stop scoring. The second red card is most disappointing moment for the visitors.

The match was a battle for less than two minutes as visiting midfielder Alexandre Jankewitz was shown a straight red card early on for a rude less challenge on Scott McTominay.

United scored four goals in the first half, with Aaron Wan-Bissaka 18′, Marcus Rashford 25′ and Edinson Cavani 39′ finding the back of the net.

Five strikes followed in the second half as Anthony Martial 69′ found the back of the net after coming on at the break before goals from Scott McTominay 71′.

Bruno Fernandes 87′ scored through penalty kick, and another Martial 90′ strike. Daniel James 90+3′ rounded off the scoring.

It was a horrible experience for
Southampton as A. Jankewitz 2′ J. Bednarek 86′ were all sent off the pitch..

” It was a stupid foul from the young lad and kills everything says the visiting Coach.

“We tried in the second half to keep a clean sheet as much as we could but at nine men it was too easy for them to score.

“What can I say? It is horrible but we stood up after the first 9-0 and we have to do that again. I said at the time we do not need it again but when we have it again you have to take it.”

“It’s always good to score lots of goals and it’s three points that we needed. We’ve dropped some points in the last few games and we needed to get back to winning ways and today was a brilliant opportunity to do that says Solskjær.

“It was just to be as simple as possible, keep moving. It’s easy to take your foot off the gas and just keep possession, but we wanted to go out in the second half and score more goals and the lads did that.