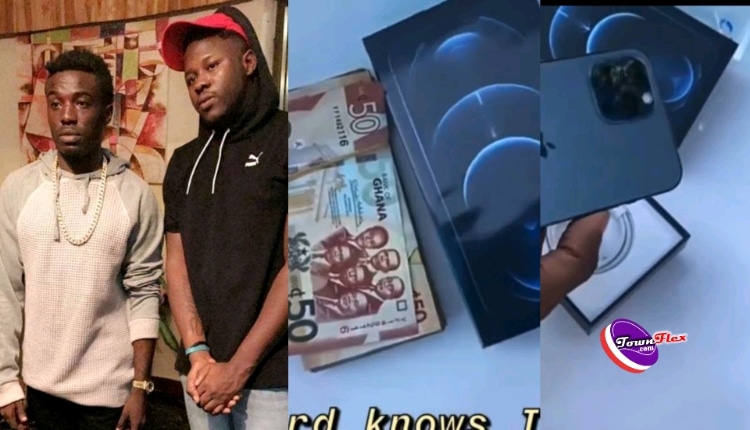 Ghanaian rapper of the AMG Beyond Kontrol crew, Medikal has gifted his bossu, Criss Wale a brand new iPhone 12 Pro and GHC 5,000 cash.

Christmas is just a few days away, and as some of us are still trying to figure out how it goes, It seems rapper Criss Waddle’s own Xmas has begun.

In a new video intercepted by us, it captured the Omo Ada hit maker, Medikal gifting his boss Criss Waddle a brand new iPhone 12 Pro and also a whooping amount of GHC 5,000 cash attached which is for him [Waddle] to use in buying airtime for calls and bandles.

Rapper Medikal has always been showering praises on Criss Waddle whenever he talks about his success, yes because Criss has been the helper he never had from way back, He contributed a lot to changing his life for the better.

On December 17 he wrote this “Who I am, what I have, what I’m yet to acquire, all be Waddle”

In a post we made sometime ago, MDK spoke about how he met Waddle and how he used to sleep under Bridges. He always appreciate the light he has thrown on him.