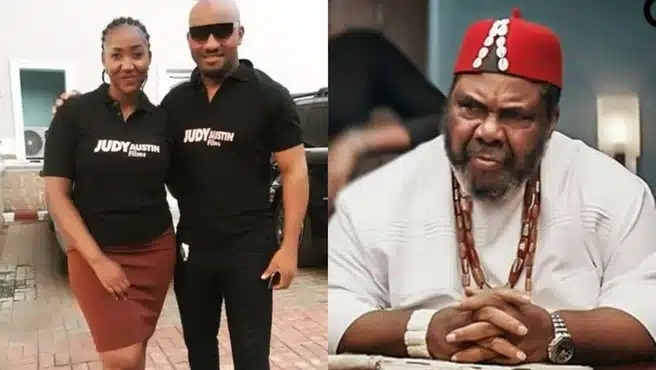 It will be recalled that popular Nigerian movie star, Yul Edochie has been in the news making controversial headlines after news of him marrying actress, Judy Austin, broke on the internet space that got a lot of fans and followers bashing him on social media.

In a recent interview, veteran actor Pete, who had been silent for some time, finally spoke up in response to Yul’s second marriage to a colleague, Judy Austin.

Pete, the seasoned actor, revealed in an interview with Vanguard that he didn’t agree with his son’s decision to take a second wife because he is a Christian.

The veteran actor, however, added that King Solomon in the bible had numerous wives and concubines and was still known as a very wise man.

“I didn’t feel good, but like I said, I’m a Christian and I read the Bible. Solomon, with 700 wives and 300 concubines, was branded a man of wisdom. It’s his choice and for whatever reason he decided to take a second wife, that’s what I can say.”

The man who values a peaceful home also made it known that matter what decisions his children take he is still and will remain their father, but it doesn’t mean he should contest their choices with them.

Pete edochie’s mature response won the hearts of many social media users who shared their thoughts and demonstrated how mature he is with his response by praising him.

See This: Pete Edochie’s Children: Check Out The Photos Of All 5 Sons & Daughter [PHOTOS + VIDEO]

Pete Edochie’s Children: Check Out The Photos Of All 5 Sons & Daughter [PHOTOS + VIDEO]