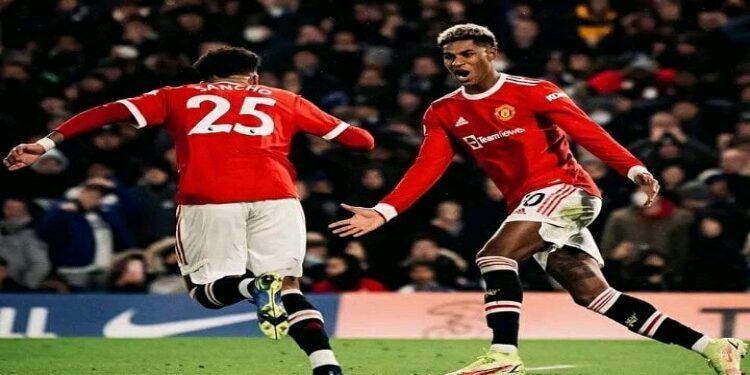 The German tactician Ralf Rangnick who is now Manchester United interim manager is considering offloading one of United promising attackers.

The German tactician thinks very highly of Mason Greenwood and Jadon Sancho as one of his key players.

However,  recent reports says the German’s desire to aid both youngsters’ development is set to come at a price.

That’s according to a recent report from El Nacional, who claims a surprise candidate to be offloaded by the German tactician is a wide-attacker, the fans favorite Marcus Rashford.

England forward, Marcus Rashford, 24, joined Man United youth academy in 2005 and has been with the Red Devils his entire career since signing.

Rashford’s career has somewhat stagnated over the last couple of seasons despite bursting onto the limelight as a teenager.

The teenager has missed a lot of games last season both club and country due to series of injuries, as well as an abysmal European Championships campaign earlier this summer that saw him miss a crucial penalty in the finals.

However, Joan Laporta’s side Fc Barcelona is set to offer Rashford a chance for a fresh start,  it is  understood that the England international has been a long-standing target at Camp Nou.

The England attacker is expected to cost around £60m (€70m), however, with Cristiano Ronaldo described as ‘untouchable’ and Rangnick reportedly preferring both Greenwood and Sancho, Rashford’s time at Old Trafford could be coming to an end.

These latest reports are likely to divide United’s fanbase With many fans adoring the English-ace and others not so keen but it is certainly going to be interesting to see how sections of the United-faithful react.

Some of united fans thinks it may be wise for the German to stick with Rashford, at least for a little longer to see what he got to offer the team.

Although Rangnick is expected to have a lot of control and say when it comes to the side’s transfer policy, given the fact Anthony Martial also looks out-of-sorts and has recently been linked with a January move away.