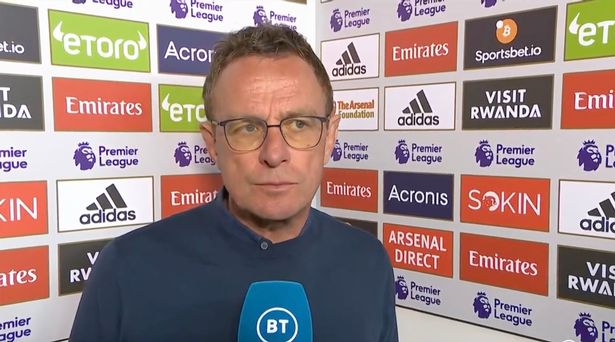 The Interim manager of Manchester United, Ralf Rangnick comes out and gives his verdict on what he thinks about his team’s 3-1 defeat to Arsenal.

As you all are aware, Arsenal hosted Manchester United at their Emirates Stadium on Saturday afternoon, April 23, 2022, which ended with a scoreline of 3-1 for United. hosdefeated

Goals: Arsenal came through by opening the scoresheet with an early goal scored by Nuno Tavares in the 3rd minute of the game, in the 32nd minute, Bukayo Saka added it making it 2-0 with a penalty shoot, Manchester’s Cristiano Ronaldo scored the only goal for United in the 34th minute, making it 2-1, which followed up with the only goal in the second hlf to end the game, it was Granit Xhaka scoring the last goal of the game making it 3-1 for Arsenal in the 70th minute.

This is a huge step for the Gunners towards qualifying for the Champions League by beating United.

Reacting to United’s failure to win, their interim manager, Ralf Rangnick had a few words to share as to what he thinks about the game, what went well, and wrong, and also what they could have done to prevent it.

What are your verdicts on the performance today?

“Improved performance but poor result, I think we created enough chances to score more than that one goal, we bounced back well to that early goal that we conceded where again we didn’t defend well inside and around our own box. This was the only negative issue regarding today’s game but after coming back from 2-0 down we had numerous chances, the penalty, the crossbar, we hit the post twice and a few VAR decisions and that’s putting it in an extremely mild way, we were unlucky. That’s why we are very disappointed about the result but our overall performance was much better.”

“I think it was still important to show some improvement and a reaction today which was clearly the case. There is no substitute to success. It would have been good for us and the level of confidence of the team if we’d been able to score a second or third goal.”

“We played well and showed a good reaction to those two early goals and still had the belief that we could score ourselves. I told the boys at half-time that if we keep playing like that, we will get enough chances to still change the game.” Ralf said.

Reacting to Fernandes’s penalty miss he said; “Yes we have to take that, if you are 2-1 down and get a penalty and have that chance after being 2-1 down, it would have helped us a lot if that was the equalizer and probably also changed the whole game but it didn’t and it only hit the post. We then hit the post twice and the crossbar so, in the end, it was very unlucky for us.”

“There was another handball issue in first half, where Jadon Sancho was involved. The second goal of Cristiano was not offside. You can see it in that total perspective. They were exactly in one line. Their third goal was clearly offside, I spoke to David De Gea after the game, and he couldn’t see the ball. Nketiah was between Xhaka and himself.

“They checked it but for whatever reasons they still gave the goal. What was the third one? Anthony Elanga? Arm in arm, the other player with him [Tavares]. For me, that was questionable but the other three situations are clear. This is why we have VAR and should expect VAR plus referee should check the situations and they should at least take the right decision.”

He also spoke on his team’s defense, saying “I said we were at least unlucky with those three or four moments, but again we have to get better at defending in the box. The way we did that until five, six weeks ago we were on a higher level. Even in the pressing moments, whenever we pressed, Arsenal we were causing problems but we just didn’t press often enough. We should do it more often with more intensity and more players involved. If all the players sprint against the ball it has an even higher effect than it has today.”.

He is much more hopeful in their upcoming next two games againsts Chelsea and Brentford which they will be playing at home, eying better results and performances.

“It’s a question again of pride and a question of honour. We owe it to the fans. We have the next two games at home against Chelsea and Brentford. We saw a few good things today offensively we had enough and created enough. It’s clear we have to defend better in and around the box.”