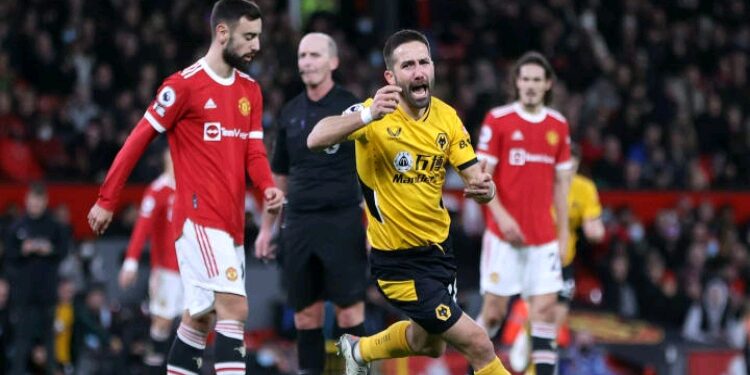 Joao Moutinho late strike fired Wolves to a first win at Old Trafford since 1980 as Ralf Rangnick’s unbeaten start to life as Manchester United’s interim manager came to an end.

The Red Devils finished 2021 with home win against Burnley, but the new year got off to a terrible start as their sloppy display was punished by Bruno Lage’s side.

United sits seventh on the table, four points behind Arsenal after their latest defeat of the 2021/22 Premier League season.

The Red Devils thrashed Leeds United 5-1 at Old Trafford during the start of the season which many football fans tipped United to challenge for the title after signing  Jadon Sancho, Raphael Varane and Cristiano Ronaldo in the summer but it looks like they now have to fight for top four spots.

Joao Moutinho, who celebrated his goal in the style of Bebeto, said: “I have a baby that is three months old and the goal is for my wife and two daughters. I had to wait nine months and three months more to be able to do this celebration.”

“We didn’t play well at all individually or collectively, Rangnick said.

”Today we showed similar problems the team had three or four weeks ago before I arrived. It is not an easy job to develop a DNA with and without the ball.”

The 63-year-old was asked if United can finish in the top four. “I cannot make any guarantees,” he said.

“Look at today’s performance, if I say we are 100% convinced we will finish in the top four I don’t know if people will believe that. It is about taking the next steps and getting better. I knew this could be hard.”

“I knew it would be difficult that’s the reason why they brought me. I knew it wouldn’t be easy to find a balance between offensively and defensively.”

”We didn’t press at all. We tried but we were not able to get into those pressing situations.”
Shaw said, questioning the togetherness of a core of senior players in the XI that included him, Cristiano Ronaldo, Edinson Cavani, Raphaël Varane, Bruno Fernandes, and Nemanja Matić.

“Us players [who] we have been here a long time, maybe tonight we struggled,” the defender said.

“I didn’t think we were all there together. You look at the players we have, we have unbelievable quality but sometimes quality is not enough.”

“They were miles better in the first half. We let them take control of the game, we weren’t aggressive, we needed to bring more intensity.”

”Maybe we lacked that today. We need to bring the intensity and more motivation.”

“Inside the dressing room we know what we want but out on the pitch we need to give 100%. To win these types of games we all need to be 100% committed. It is tough and disappointing.”

Rangnick was noticeably booed when he removed Mason Greenwood in the second half.

“We decided to keep Edi as the more offensive. “It shows how high the fans like Mason as a homegrown player His effort and performance was not outstanding but he was one of the better players today.,” he said.