At first it start as rumours, yes i mean we were hearing things here and there about the young rapper wanting to part ways his management, which he denied and said they are all false news. So let’s forget about that and face the current day.

The two years contract between Sarkodie‘s Sarkcess Music Record Label and their former signed act Strongman happen in March 2017 and ended in accordance.

Also Read: Mother Of Amissah-Arthur Prays For Mahama Ahead Of 2020 Polls

Sarkcess Music wished the young rapper the absolute best in all his future endeavors. They also stated that even though the contract has ended they are still family and will be willing to lend a helping hand when been called upon when ever the need arises.

Below reads the press statement released to the public by the Record Label.

END OF CONTRACT BETWEEN SARKCESS MUSIC AND STRONGMAN

SarkCess Music wishes to announce the end of its contract with Osei Kwaku Vincent well known in showbiz circles as Strongman.

Working with a gem of his kind for the past two (2) years has been priceless.

The journey with Strongman has all together been an amazing and remarkable one. Strongman has proved beyond doubt to be a sensational talent, gracing the Ghana Music Industry and the world with his presence hit after hit and some incredible performances.

It is worth mentioning that Strongman during the past two (2) years has been a phenomenal artist growing his brand here in Ghana and beyond the shores of the country.

We are grateful to the fans, management, industry and all who made this SarkCess Music – Strongman journey worthwhile.

Strongman is such a phenomenal artiste we wish him the absolute best in all future endeavors. We wish to reiterate that, even though the legal relationship between both parties have officially come to end, we still remain a family. Our doors are forever open and we promise to extend a helping hand anyway possible should our services be needed. 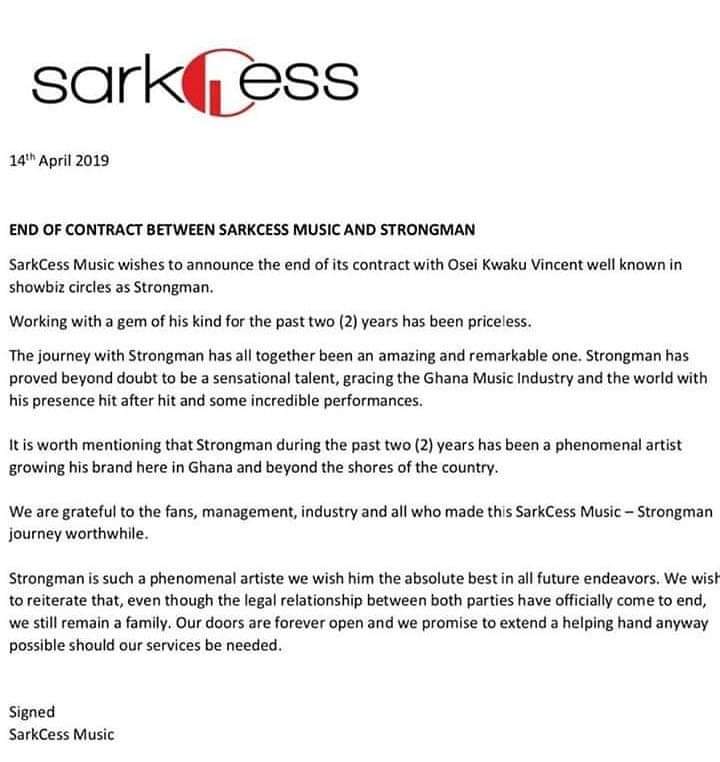 Loading...
sarkcess musicSarkodiestrongman
767 767
Subscribe to our newsletter
Sign up here to get the latest news, updates and special offers delivered directly to your inbox.
You can unsubscribe at any time

Mother Of Amissah-Arthur Prays For Mahama Ahead Of 2020 Polls

Sarkodie About To Launch His First Book “The Highest”