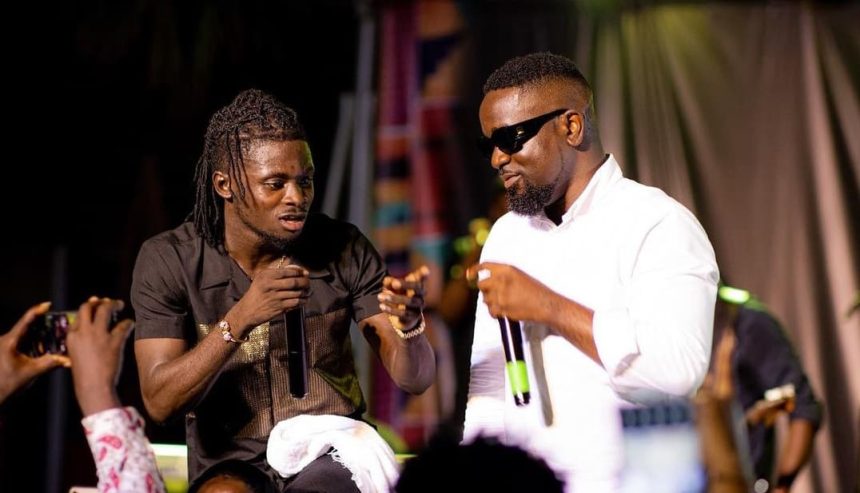 Lynx Entertaiment star, Eugene Kwame Marfo aka Kuami Eugene has revealed in a new video that rapper Sarkodie cannot be reffered to as his friend.

Kuami Eugene made this known in a one on one chat with KMJ on Joy Prime TV during an interview session.

According to the VGMA Artiste OF The Year, rapper Sarkodie is not his friend and that Sark owes him no freindship.

In Kuami Eugene’s definition of who a friend is, he made it clear that a friend happens to be someone who will vibe with you always, meet, hang out, check up on you, stand behind you and fight for you, and also since he is into music that friend will help share all his new musical projects not less than 10 times a day.

He added that if Friendship was to be someting like ‘hi’, ‘boss, jump on my song’, then Sark would have been his friend but to him thats not friendship, and thats the kind of relatioship he share with him. concluding that he and Sarkodie are just industry mates (colleague musician).

This is what he said in his own words;
“I’ve had only a few people come to my house. I don’t have any fear. I think it’s a bit shaky when it comes to my work. I think if I get too much involved in it, it will affect my work.”

“People try to side-line me when I try to mingle with top guys in the industry. I just respect my corner. I met a lot of big artists when I came in. I met KiDi, King Promise and Joey B. So, if they want to be friends, let’s vibe but we are not childhood friends.”

“The thing is, Sarkodie is not my friend. Some people are colleagues and others are industry mates. And the fact that you are in the same school with someone doesn’t mean you are automatically friends.”

“I don’t expect Sarkodie to follow me to my father’s funeral. I don’t want to act like Sarkodie owes me. If Sarkodie is my friend, then he will post my videos twelve times a day. That’s friendship. But it’s not happening right now because we are not friends, we are industry colleagues,” he concluded.

Watch the full video below.