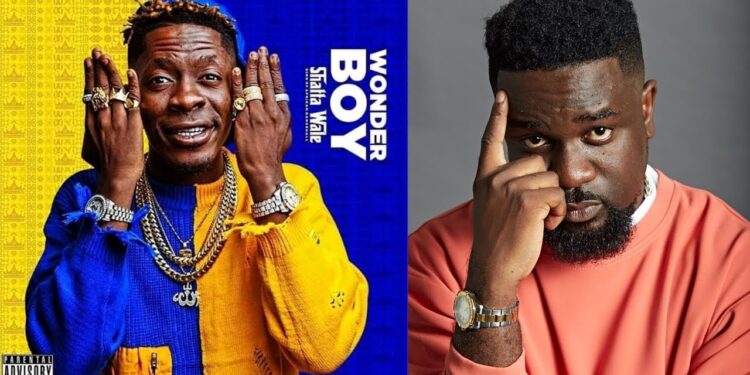 As many of you already know, the Ghanaian dancehall recording artiste, Shatta Wale born with his legal name as Charles Nii Armah Mensah has on Wednesday, December 8th, 2021, officially launched his ride-hailing service “Shaxi”.

Shatta’s Shaxi is now operational and drivers are rushing to get linked up to make some money with it, Shaxi is to compete with the likes of Uber, Yago, Bolt, and other popular Ride-hailing services.

After a while now, it seems rapper Sarkodie has now fallen in love with the SM boss, Wale’s Shaxi initiative, and has thrown his support behind the movement for a great job done.

Sarkodie has been dragged (trolled) on social media by some fans, industry players, and also critics for being silent and not rallying his support behind Wale’s business despite noticing most of his colleagues and celebrity friends are on board and are in support of the Shaxi initiative.

The Sarkcess Music boss has finally bowed to pressure as he took to his official and verified Twitter account where he made some tweets suggesting he is now in bed with the ride-hailing idea by his buddy Shatta Wale.

Sark, in one of his posts made on Monday, December 13, called on his fan to try to pull up (ride in) Shaxi for his upcoming Rapperholic Concert 2021 slated for December 25, 2021, if they don’t wanna be late.

He again tweeted saying he himself will come to the come riding in Shxi, which suggests he is in bed with the Shaxi initiative and has fully endorsed it.

“Y’all can pull up in #Shaxi if you don’t wanna be late for #Rapperholic2021.

The App for Shaxi is now Android Smartphone users on the Google Playstore, one can easily download, install and start using the service, Wale has also announced that his technical team is working hard to get the app also made available to iPhone (IOS) users as well.