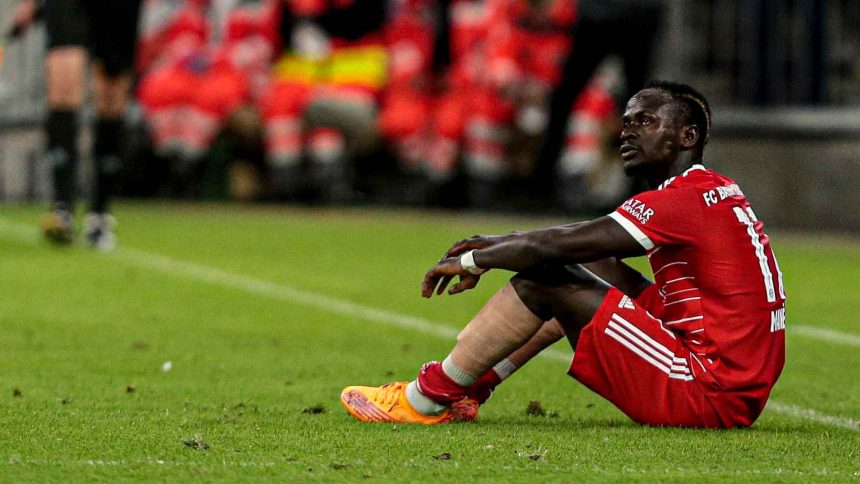 Sadio Mane, a forward for Senegal, hurt himself on Tuesday at the Allianz Arena in Munich and is likely not to play in the Qatar 2022 FIFA World Cup.

The Bayern forward left the field after just 20 minutes of the 6-1 victory for the Bundesliga champions over Werder Bremen.

Mane’s injury is said to be related to his tendon and is expected to keep him out of playtime for several weeks.

In spite of the fact that Senegal’s World Cup campaign is set to begin against The Netherlands at the Al Thumama Stadium in a few days, they are likelt to be without their star.

Mane guided the Teranga Lions to their first ever Africa Cup of Nations victory after defeating then-teammate Mohammed Salah’s side, Egypt, 4-2 on penalties in Cameroon. It was a decisive penalty that secured their fate as champions.

The former Liverpool player, who led Senegal in scoring with 34 goals, was essential to the qualifying of his nation, which also saw them defeat Egypt twice this year, both times on penalties.

Mane is the latest prominent athlete to sustain an injury prior to the World Cup in Qatar. Paul Pogba and N’Golo Kante (both from France), Timo Werner (from Germany), Diogo Jota (from Portugal), Georginio Wijnaldum (from the Netherlands), and Ben Chilwell are a few of the players (England).

Many leagues throughout the world are still in play despite some of the players competing at the competition, raising questions about the players’ condition.

“It’s an unpleasant spot, it radiates a bit into the muscles.

“I think he has to go to the X-ray to see if there is something there, because it is splintering easily.

“But I hope that nothing is wrong. I can’t say anything for sure yet.”

Senegal coach and former international Aliou Cissé will reportedly announce his squad for the Qatar tournament on Friday.

The Teranga Lions are in Group A alongside hosts Qatar and Ecuador.