Spanish Super Cup: Xavi says Barcelona were superior to Madrid in many moments 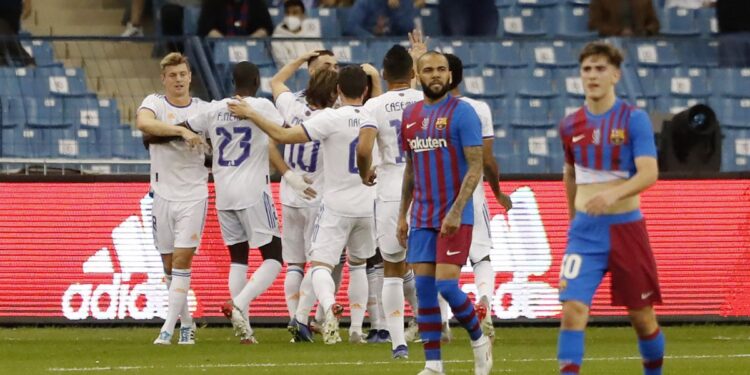 The Blaugrana who sit 17 points behind the LaLiga leaders fought back twice to push their rivals all the way to extra time in the Supercopa de España semi-finals.

Barcelona twice came from behind to level with Real Madrid before Federico Valverde 98′ mins eventually netted a winner on the counterattack.

Both Vinicius Junior and Karim Benzema gave Madrid the lead 25′ and 72′ mins, responses from Luuk de Jong 41′ and Ansu Fati 83′ mins pushed the game to an extra time.

Barcelona’s 2-3 lose on Wednesday night makes it five consecutive Real Madrid victories in Clasico games but Xavi’s side were far from outclassed and instead showed there is great hope at the club for the future.

Xavi Hernandez said his young Barcelona team could leave with their “heads held high”, despite losing to Real Madrid in the semi-final of the Spanish Super Cup on Wednesday.

“It was clear that it was a day when we showed courage and took responsibility with the ball.

“Today was a day to go out with your head held high despite the defeat,” Xavi added.

“We were superior to Madrid in many moments,” he added.

“It’s two different feelings, A very bad feeling of defeat but on the other hand we can feel very proud of the game. We need a little more patience.” Xavi said.

Real Madrid coach Carlo Ancelotti was pleased with his team’s ruthlessness on the break.

“The game was even, they had more possession, we had more counter-attacks,” Ancelotti said.

Gerard Pique said Barcelona are getting closer to being a team that can challenge for trophies again.

“I think playing like this we are going to start winning and start competing for lots of titles,” Pique said.

Real Madrid through to Sunday’s final after Fede Valverde’s winner, they will meet either Atletico Madrid or Athletic Bilbao, who play the second semi on Thursday.