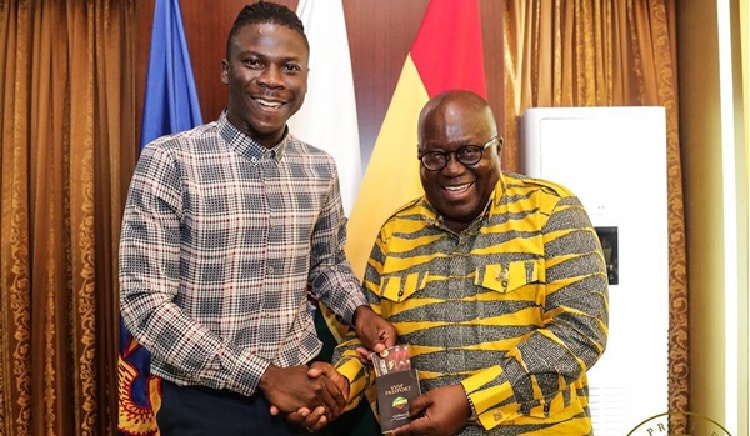 Ghanaian multiple award-winning reggae/dancehall recording artist, Stonbwoy congratulates Akufo-Addo after his victory in the December 7 elections, elected as President of the Republic of ghana.

Stonebwoy prior to the General Election released a song titled “One Nation One People” featuring the likes of; King Promise, Fancy Gadam, Fameye, Maccasio, Efya, Teephlow, Darkovibes & Bethel Revival Choir. serving as a peace song to ensure that Ghanaians give peace a chance to rain during and after the election.

President-elect Nana Addo Dankwa Akufo-Addo of the New Patriotic Party (NPP) was declared the winner of the just-ended December 7, 2020, presidential by the Electoral Commission boss, Madam Jean Mensa after he managed to poll a total of 6,730, 413 which is 51.59%, while John Mahama of the National Democratic Congress (NDC) polled 6, 214, 889 which gives him 47.36% of the total votes cast.

Stonebwoy after the declaration of the final result by the EC, took to social media where he applauded the efforts made by the Opposition Party, National Democratic Congress (NDC) led by John Dramani Mahama and said they ‘fought a good fight.’

“Congratulations To the NPP and @NAkufoAddo The President-Elect.. The NDC fought A Good Fight.. Let’s Continue in Peace And Harmony.. #1People #1Nation #1Ghana” He wrote.

Congratulations To the NPP and @NAkufoAddo The President Elect..
The NDC fought A Good Fight..
Let’s Continue in Peace And Harmony.. #1People #1Nation #1Ghana🇬🇭https://t.co/Er2EJyDqTV pic.twitter.com/NjGnFTYfuK