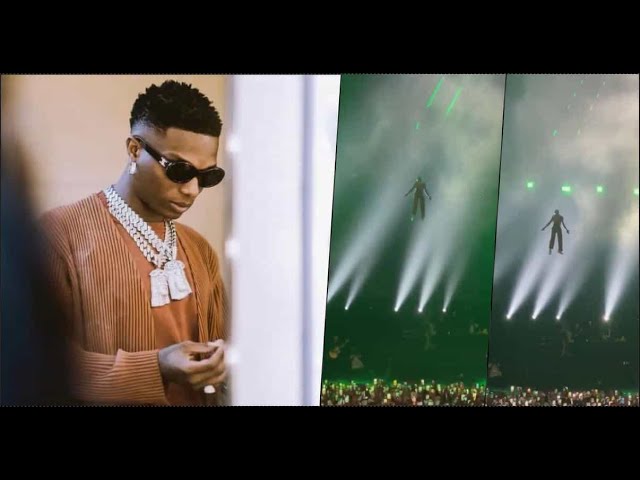 Wizkid makes the trends again as he gives music lovers more reason to call him the “GOAT” following his recent stage performance as he makes a spectacular entrance.

At the Accor Arena concert in Paris, France, the top-charting Nigerian musician, who has won a Grammy Award, enters in style, illuminating the crowd of his followers.

Wizkid Accor Amera Show Performance: On Friday, September 16, the Grammy winning artiste who sold out the Accor Arena which is said to be the largest indoor arena in France with a capacity to host a total of 20,300 people made the gathering more a joyous one as he performed.

Most of the fans were thrilled with Wizkid who is born with his legal name as Ayodeji Ibrahim Balogun’s choice of hitting the stage.

Wizkid’s decision to arrive and make his entrance suspended from the air to the stage, where he sang his most recent single, Bad To Me, and other hit songs of his, is trending in a video for those who were unable to attend the performance.

Fans rejoiced when he arrived, descending from the sky like a superhero to save those who lived on earth.

Wizkid is notorious for never giving boring performances, and in this recently concluded show, trust me, he nailed it, giving his adoring fans even more reasons to love him.

Watch below, the video of the moment Wizkid descends on the stage to debut his performances which turned on the crowd.

See This: Wizkid drops new music ‘Bad To Me’ [Listen]