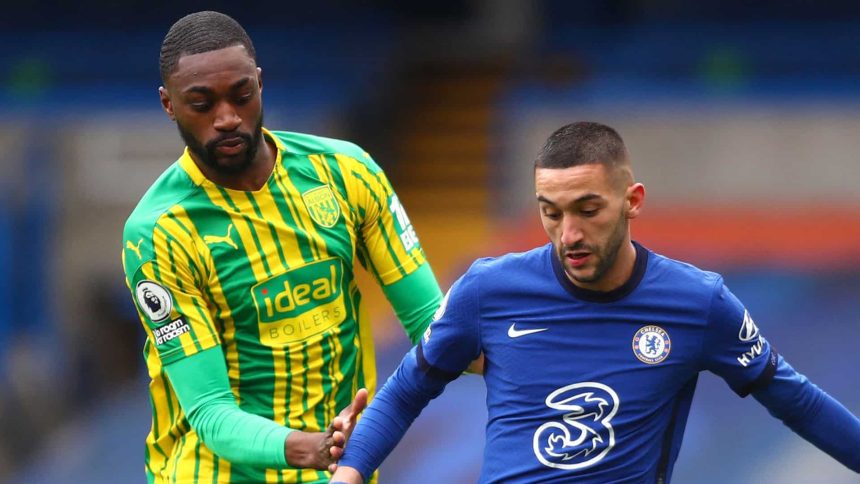 The Premier League returns after the international break and Thomas Tuchel was desperate for Chelsea to maintain their push towards the Champions League for next season.

Chelsea was unbeaten in their last 15 matches in all competitions, They did draw their last game against Leeds United 0-0, but Lost against West Brom

This is a quite extraordinary scoreline that nobody in their right mind could have predicted this morning. West Brom has looked like Brazil at times here and is well worth their win. Thomas Tuchel’s first defeat as Chelsea manager has been a total humiliation at the hands of the second-worst team in the division.

Chelsea scores 27″ after so many attempts, Pulisic reacts to the rebound in a central position, firing his effort into the middle of the net.

RED CARD! Thiago Silva is sent off
29 min: Already on a yellow card, Thiago Silva slides in to try to block a Yokuslu shot from the edge of the penalty area and accidentally takes out the Turkish midfielder. He’s off!

West Brom levels 1-1!! Pereira lifts a sublime strike over Mendy to get West Brom back into the contest. Johnstone provides the assist from the back with a hopeful long ball forward.

GOAL! West Brom took the lead! (Pereira 45+5)
Matheus Pereira shoots into the bottom right-hand corner with his left foot after selling a dummy to three Chelsea defenders who thought he was going to aim for the opposite one with his right. What a turnaround before half time.

Another Goal (Robinson 63)
West Brom extend their lead! Callum Robinson volleys home a Darnell Furlong cross from the right into the top corner from just inside the Chelsea penalty area.

Goal as West Bromwich Albion
(DIAGNE 68) MAKES IT 4-1.
The Baggies are surely out of sight as Diagne finishes a brisk counter with a good finish into the bottom-left corner. Robinson leads the charge and offloads towards Townsend down the left flank. He supplies a perfect backheel for Pereira, who slides a pass to Diagne in space. The forward provides a crisp strike to beat Mendy with a precise strike.

GOAL! Chelsea 2-4 West Brom (Mount 70)
Chelsea give themselves a glimmer of hope. Marcos Alonso crossed from the left and the ball fell to Tim Werner about six yards out. He took a touch and instead of shooting with a defender in front of him, unselfishly laid the ball off to Mount, who tapped into a more or less empty net.

90′ + 1′ GOAL for West Brom (Robinson 90+1) makes it 5-2! Pereira was the architect once more as he clips an offload into the right inside channel. Robinson only has Mendy to beat and he lifts his strike over the keeper and into the bottom-left corner. VAR has a quick check for offside, but the goal was confirmed.

The Baggies secured a massive win this afternoon as Robinson notches his second and last goal of the game..

Chelsea have to turn the page quickly as they take on Porto in the first leg of their Champions League quarter-final match on the road on Wednesday. West Brom are next in action against Southampton on April 12 at The Hawthorns.