Where will Erling Haaland end up after £80 million release clause next year?? 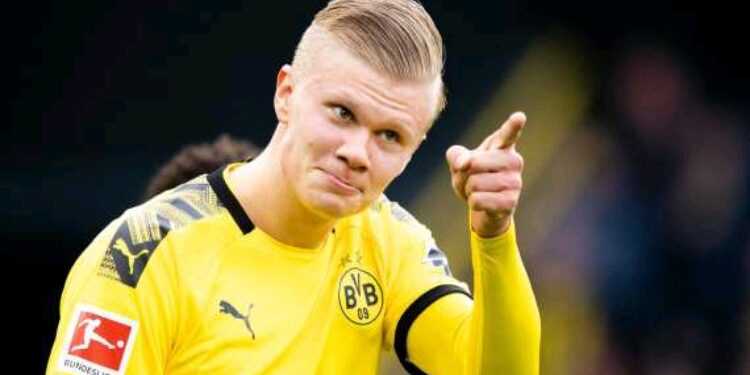 The 21 year old Norwegian has scored a phenomenal 76 goals in 75 games for his club Dortmund since his arrival from Red Bull Salzburg in January 2020.

A fee around 80 million euros ($90 million) release clause becomes active next year in his Dortmund contract, valid until 2024, which could allow Haaland to leave in 2022.

“We will talk in the next few weeks,” the clubs CEO Watzke said in early December, “and we will all make sure that we don’t wait until March or April to know the decision.”

“He can and wants to take the next step,” Raiola added, listing Bayern Munich, Real Madrid, Barcelona and Manchester City as possibilities.

“When he signed for Dortmund, we all knew that this next step would come.”

Barcelona president Joan Laporta has already met Raiola while Bayern president Herbert Hainer said that they were out of the running .

Dortmund have already signed a back-up striker in Dutch forward Donyell Malen, who is finding form after a slow start since joining from PSV Eindhoven.

Dortmund paid 20 million euros for the Norwegian forward in January 1 2020.

The 19-year-old immediately showed a return on the investment by becoming the first player in Bundesliga history to score a hat-trick as a replacement on his debut in January 2020.

According to Marca, Borussia Dortmund are looking into the possibility of increasing Erling Haaland’s salary by twice the amount he currently earns.

Dortmund are keen on keeping Haaland at the Signal Iduna Park for another season but just monetary incentives would not be enough to convince the young prolific striker.

Real Madrid reportedly prefers having Erling Haaland wait until 2023 to complete his transfer to the Spanish capital as Karim Benzema’s direct replacement.

Benzema’s is currently on contract with Los Blancos until 2023 and the club consider’s Haaland to be the ideal successor to the Frenchman.

However, in the event that Haaland decides against waiting for another year, Madrid are more than willing to sign him in the summer.

He further stated that Haaland might be inclined towards La Liga over the Premier League since the Spanish league seems to be more suited to the player’s ability and technicality.