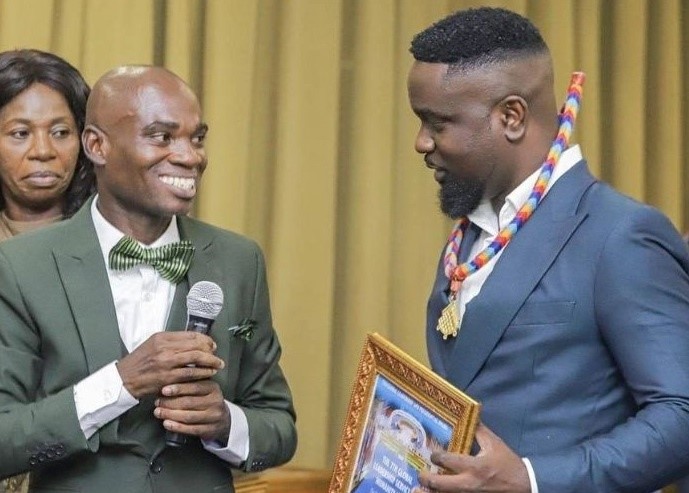 Dr. Kwame Fordjour aka Dr. UN, the self-acclaimed ambassador for the United Nation (UN) sends a message to Ghanaians rapper Sarkodie to return his award if still sees it to be fake.

Social media has been on fire for some time back following reports that Kwame Owusu Fodjour has pulled off the biggest scandal to hit Ghana in the current times by giving out fake awards to some top-notch Ghanaian celebrities and also some politicians.

The awards ceremony dubbed “UN Kofi Annan Global Excellence in Leadership Award” held in Accra on Friday, August 28, 2020, to honor some Ghanaian personalities for their accomplishments in their various fields of endeavor.

See This: The Fake UN Awards: see the full list of Ghanaian Personalities who received the plaque

Musicians in the likes of; rapper Sarkodie, D Black, Daughter of Glorious Jesus, tv personality Berla Mundi down to politicians like Chairman wontumi got scammed by the organizer “Kwame Owusu Fodjour”.

Dr. UN speaking in a recent radio interview sent a message to rapper Sarkodie daring him to return the plaque he received from the award scheme if he still insists that it’s not real but fake.

According to him, he gave the rapper and other genuine awards, but he still doesn’t get why King Sark still describes the award as fake. He also added that he is ready to help Sarkodie if only he humbles himself.

In his own words – “How can Sarkodie describe the award I gave him as fake? I gave Sarkodie and others genuine awards. I’m ready to help Sarkodie to if he humbles himself”.

“He should return it if it is fake” he stressed.