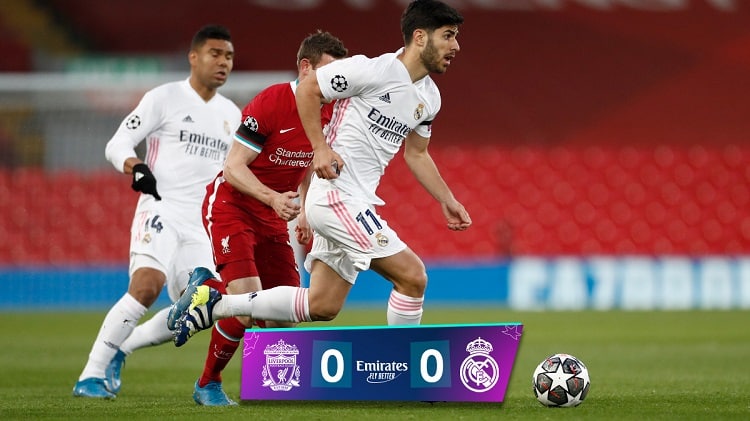 Madrid draw Liverpool to qualify for the semis: Liverpool knocked out
SHARE

The Reds faced a tough task in their quarter-final second leg clash, seeking to overturn a 3-1 deficit after a poor performance in Madrid eight days ago.

Exactly the same applied in the second half, with opportunities less frequent but still plentiful, and they ran out of steam in the end.

Jurgen Klopp’s side paid the price for a disastrous 45 minutes in the Spanish capital last week as that 3-1 quarter-final first-leg defeat essentially put them out.

They created enough chances to have clawed back the two-goal deficit but goalkeeper Thibaut Courtois was hardly extended as yet another wasteful performance from their forwards proved costly with 15 attempts producing just four on target.

Real looked in control though as their defence sat back to soak up plenty of pressure from Liverpool, and they almost killed the tie off when Vinicius Junior broke down the left, the hosts requiring goalkeeper Alisson to block his shot and smother Benzema’s follow-up.

Liverpool still pressed forward and Thiago’s cross-field ball was brilliantly kept alive by Alexander-Arnold only for Firmino’s shot on the turn to rebound off Eder Militao when that vital breakthrough seemed likely.

Benzema then should have put the hosts out of their misery when his downward header bounced over, but it mattered little with Liverpool’s hopes of Champions League football now resting on overhauling Chelsea and West Ham, and perhaps even Leicester, to get into the top four.

It means Liverpool’s only avenue back into next season’s Champions League is via a top-four finish in the Premier League, as their dreams of winning European Cup number seven ended.

But this was a controlled, disciplined performance from the 13-time European champions who knew exactly what was required to get the job done.

It is almost two years since that famous semi-final second-leg comeback against Barcelona and it was five years to the day since the rousing Europa League recovery against Borussia Dortmund but aside from goals this tie was missing one crucial factor – fans.

Hundreds of supporters had lined Anfield Road, very few wearing masks or observing social distancing, to greet the teams with a number setting off flares and smoke canisters.

However, a small minority resorted to throwing objects at Real’s coach and one window was smashed, an act Liverpool condemned as “unacceptable and shameful” and apologised for any distress.