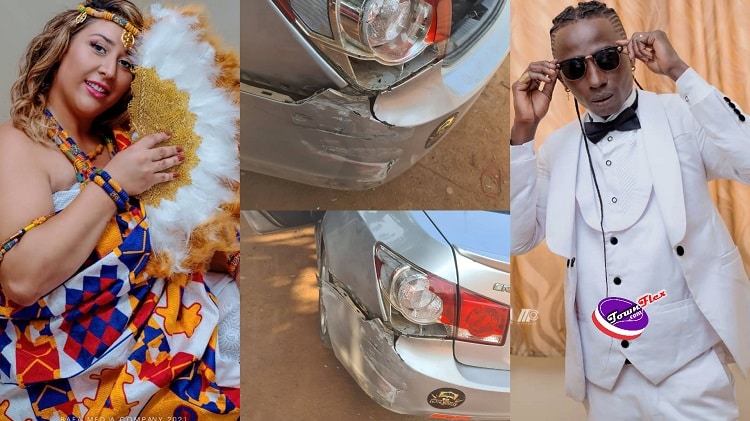 New photos and video sighted by Townflex confirms that Patapaa and his newly wedded wife Liha Miller has been involved in a car accident.

This news was broke by Liha Miller, wife of the Ghanaian musician Justice Amoah popularly known as Patapaa on Friday, January 8th, 2021.

She took to her Instagram page on Friday and made two posts, one was with pictures of the car they were driving and the other post too was a video of the car.

Her series of posts showed that some parts of the car conveying them both was badly damaged, but the good news was that they both survived without getting injured.

“@patapaa_amisty & I Had A Car Accident 😭” she captioned her first post which happens to be a video post.

And they shortly after her video post she made another post which is a photo post saying “official_liha_miller Thank You God🙏🏽We Are Still Alive. It Wasn’t Our Time Yet, But I am Still In Shock 😭💔”.

Patapaa and his German wife, Liha Miller are the newly wedded Celebrity couple in town.

The two lover tied the knot on Saturday, January 2, 2021 and officially became husband and wife. Click here to see pictures and video from their wedding ceremony.