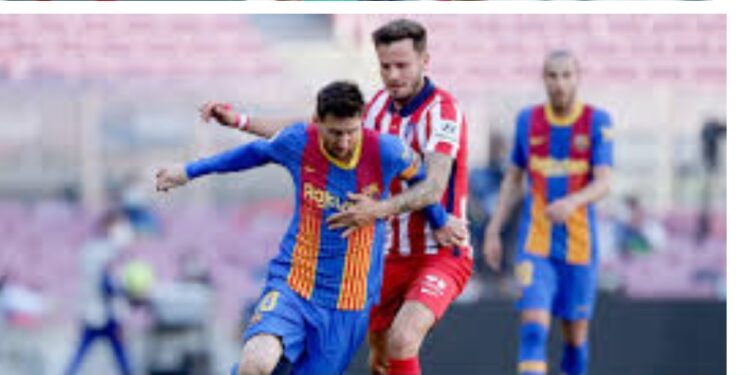 Atletico Madrid’s 0-0 draw at Barcelona on Saturday meant that victory for Zinedine Zidane’s men would have drawn them level on points with Atleti and, thanks to their better head-to-head record, they would have leapfrogged their neighbours.

But Sevilla still have title hopes of their own and will be devastated to have let a lead slip so late after Ivan Rakitic’s penalty looked to have won it for the Andalusians.

Real Madrid move second, level on points with Barca but two behind Diego Simeone’s side.

It was a night of frustration for Real, who saw a Karim Benzema goal disallowed early after nodding in Alvaro Odriozola’s cross. VAR confirmed that Odriozola had strayed just offside in the build-up.

Barca and Atletico drew 0-0 at Camp Nou, in a tense, terse clash, that suited neither team. Atletico stay top, on 77 points, Barcelona second, on 75, but if Real Madrid had beaten Sevilla on Sunday they will be in control of La Liga.

With Jan Oblak vulnerable for the first time, the perfectly-placed Ousmane Dembele headed the ball over the bar.

At the other end, Luis Suarez kicked thin air as the ball rolled across his path, his chance to punish Barcelona for forcing him out last summer disappearing in front of his eyes.

A victory would have taken Zinedine Zidane’s side to 77 too, and they have the superior head-to-head record over their city rivals.

Four wins from their final four games for Real Madrid would have handled the title. After their shipwreck at Stamford Bridge, they can yet salvage something from the season. but unfortunately for the Los Blanco’s who drew to Sevilla on Sunday

In Catalunya, the still suspended Ronald Koeman watched on from the back of the presidential box as his team started slowly. Atletico’s gameplan would have been the same regardless of their situation, play for the 0-0 and then try to plunder a late winner.

Oscar Mingueza and Sergino Dest were shaky, with Atletico finding some joy down Barcelona’s right-hand side. Thomas Lemar, before an injury saw him replaced early on, and Yannick Carrasco were creating danger, with Atletico starting to dominate after Sergio Busquets was forced off with a head injury.

Belgium winger Carrasco, who scored the only goal in Atletico’s 1-0 win over Barcelona in November, was the visitors’s most influential player, tying Mingueza in knots.

At the other end, Lionel Messi created Barcelona’s best opportunity, with a typically mazy dribble and a strike that Jan Oblak did well to tip wide. It would have been up there with the Argentine’s very best had it gone in.

Slovenia goalkeeper Oblak, on his 300th appearance for Atletico, put in a typically impressive performance, denying Gerard Pique from close range, among other saves.

The Barca centre-back mainly had his hands full at the other end in an entertaining battle with former Blaugrana hitman Suarez on his first return to Camp Nou.

The Uruguayan was typically combative, fouling his friend and former neighbour Messi in the opening stages, then going down holding his head after a clash with Marc-Andre ter Stegen.

Suarez was not the only one to occupy himself with keeping Barcelona’s No.10 down, either, with the nine fouls Messi suffered more than in any other La Liga game he has played in.

Those saves were, perhaps, too good for some Barcelona fans, for whom a defeat would have been preferable to a draw due of the battle lines between them and Real Madrid.

This draw, though, handed the impetus back to the white half of Madrid but they failed to win.