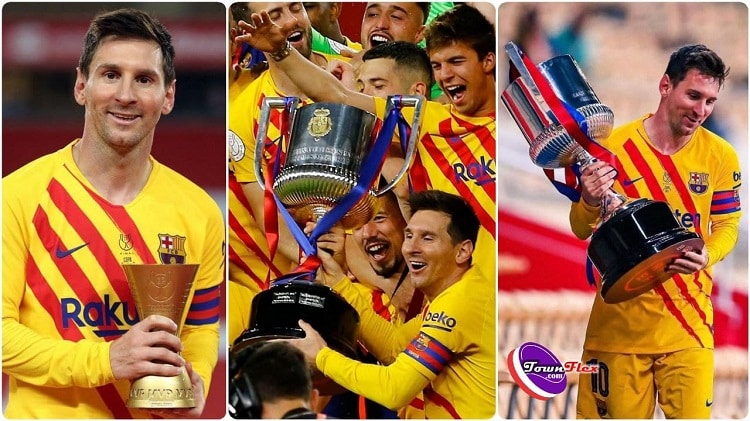 The 2021 Copa del Rey Final was a football match that decided the winner of the 2020–21 Copa del Rey, the 119th edition of Spain’s primary football cup (including two seasons where two rival editions were played). The match was played on 17 April 2021 at the Estadio de La Cartuja in Seville between Athletic Bilbao and Barcelona.

Lionel Messi went up to collect his first Copa del Rey title as Barcelona captain on Saturday after scoring twice in the final win over Athletic Club.

The Argentine, who took the armband from Andres Iniesta in 2018, was clearly thrilled to lead his club to glory in Seville

“It’s very special to be the captain of this club,” Messi told Barca TV.

“It’s a very special Copa for me because I’m able to lift it [myself].

“Not being able to celebrate it with our fans is a pity.

“The situation is what we have to live with. It’s a shame.

“The Copas are always special and the fans enjoy them a lot.

“These are two clubs that are used to these finals and [used to] enjoying them a lot.”

A wasteful first half gave way to free-flowing football from Barcelona in the second, with their skipper netting twice.

“We were patient on the ball and created our own space.

“We moved about a lot in the first half and I think they dropped off in the second.”

After a tough start to the campaign, Barcelona now find themselves in contention to win a double, with LaLiga Santander still to come.
is
“We found it difficult to get started in the first half of the season,” Messi admitted.

“We dropped points out of innocence.

“We’ve been getting stronger, very good, and we’re in the title race.

“The other day, unfortunately, we weren’t able to get a good result in the Clasico.”