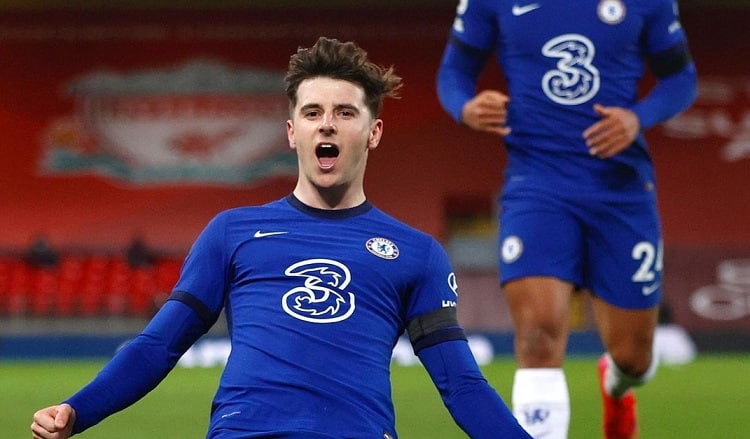 For the third away game running in the Premier League, Mason Mount scored a significant goal for Chelsea as his sublime solo effort proved the difference between the Blues and Liverpool at Anfield on Thursday evening.

Following a converted penalty at Southampton and the opener against Sheffield United in recent matches, this was the young midfielder’s third goal in six games in all competitions, making him the top scorer under Thomas Tuchel.

There are few more influential for the German’s side right now, particularly in an attacking sense, and the match-winner reflected after the Merseyside victory on what went right for him and his team-mates against the faltering champions.

‘I’m very happy with the performance of the whole team,’ he stated. ‘It’s never easy coming here because you always get a tough game against this team at this stadium but we’ve been playing well and our mindset coming into the game was confident.

‘We’ve been on a good run recently, winning games, getting points and not conceding many chances or goals. We felt like we could come here, put in a good performance and win the game. When you turn up with that mentality, of wanting to give it to them and press high, you’re always going to have a chance.’

Mount’s sixth goal of the season edges him closer to the double figures target he sets himself and was perhaps his best of the half-dozen netted so far this campaign. Drifting into space down the inside-left channel, he took on N’Golo Kante’s lovely pass and seemed intent to make something happen all by himself.

Outnumbered but undeterred, he skipped past Fabinho and Trent Alexander-Arnold before producing an expert finish into the bottom far corner. It was a moment that deserved to be greeted by the unadulterated joy of a delighted away end celebrating a vintage strike from a homegrown star. Nevertheless, the significance of the goal was not lost on the 22-year-old, who explained how it had come as much from design as inspiration.

‘It just happened so quick,’ he recalled. ‘We know they have quite a high line and they like to press high, especially at home, so any time we won the ball back from turnovers or we played out from the back, we looked to go in behind them.

‘When I got the ball, I thought I was in a bit of space and I could go at Fabinho, even though Trent was maybe coming back as well. When I got into the box, I knew I was one-on-one so I just tried to get a yard, get it on to my right foot and then when you’re inside the box, you can open up the goal a bit. That was my idea. I tried to execute it and it went into the far corner. It was a massive goal for us and a massive win as well.’

As well as reviving the ‘Frankenstein’ celebration from last season, Mount also had a bit of fun with Ben Chilwell in the aftermath of the goal and explained how Kurt Zouma had inspired their latest routine.

‘Me and Chilly always sit together behind Zouma on the plane when we travel away for the Champions League and stuff,’ added Mount. ‘He’s always watching cartoons like anime so we usually watch from behind and laugh at him.

‘We said if one of us scored, we’d do it so that was the reason behind it and obviously it’s one for Kurt as well.’

Back to more serious matters and the ongoing battle for Champions League qualification. The Blues are back in the top four, having established a four-point gap between ourselves and Liverpool with 11 games remaining. It is the same distance to second place and Mount feels we should aim as high as possible

‘It pushes us up there a little bit more,’ he said of this latest victory. ‘We’re not content to be in and around the top four – we want to secure our place in those positions and to be right up there.

‘We need to keep working. We’re on a good run but we need to go into every game confident and hopefully that will help us secure a good position.’