Dbanj helped me blow, Don Jazzy reveals how it happened 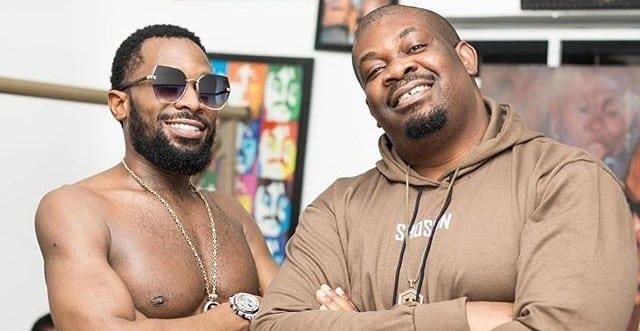 Popular Nigerian record producer and executive, Don Jazzy has revealed that his success and achievement in the entertainment industry is due to the support of fellow Nigerian musician, Dbanj.

Speaking in a recent interview with Olajide Adesope tagged: “Don Jazzy on Afrobeats Podcast 50th Exclusive Edition”,  the celebrated Mavin Records boss Don Jazzy who is born wiith his legal name as Michael Collins Ajereh said Dbanj, the Kokomaster, was the ‘catalyst’ for his many achievements.

According to him, he used to be content in the situation he used to be in but Dbanj saw him and everything people are now seeing in him now and sparked in in him, adding that let to him alone, he would have been where he was feeling he was content but the Kokomaster changed his life.

“Dbanj is the creator/catalyst. If you leave me, every situation I’m in, it’s like I’m contented, I’m okay there.

“But Dbanj saw me and everything that people see in me now. He just sparked it in me.

“Left to me, I would have just been where I was and not do much about it. So, I would say he was that catalyst that said ‘Jazzy do this and that’.

“He ensured I achieved the things I did. He sold the idea of us coming back to Nigeria and that we did.

“All I know is that I had always wanted to build a beautiful record label or an entertainment company that is a powerhouse for developing artistes for Africa.

“We don’t have one. So, I felt there should be one at least to give people hope. Find people, develop them and send them out to the world.

“Now, it looks a whole lot easier getting to the world than it was back then. But it remains the goal: find young people and break them internationally,”.

The multiple award-winning versatile artiste has threatened to sue and take legal actions on the online news portal over a wrong caption, misinterpretation of his statement on Angel FM during an interview with host, Ohemaa Woyeje.

According to a post published on Ghanaweb which was a story they copied from Angelonline it stated that Samini’s colleagues whom he mentored/natured Stonebwoy, Kofi Kinaata, and Kaakie owe their success in music to him.

The dancehall recording artiste, Samini after coming across the news wasn’t that happy as he expressed his frustration towards the online news portal and have decided to go legal for misquoting his statement.

Samini took to his official Twitter account and made it known that he will be taken them on legally, according to him, he never said Stonebwoy, Kofi Kinaata, and Kaakie owe their success in music to him but rather he said no A-List artiste has ever done what he has done when it comes to supporting the young ones. Click Here To Read Full Story.

I hope you had a nice time going through the above article, if you did then subscribe to Townflex.com by clicking on the bell icon displaying in the bottom corner to receive our daily post updates first, and also click to subscribe to our YouTube channel for more updates. Arts & Entertainment