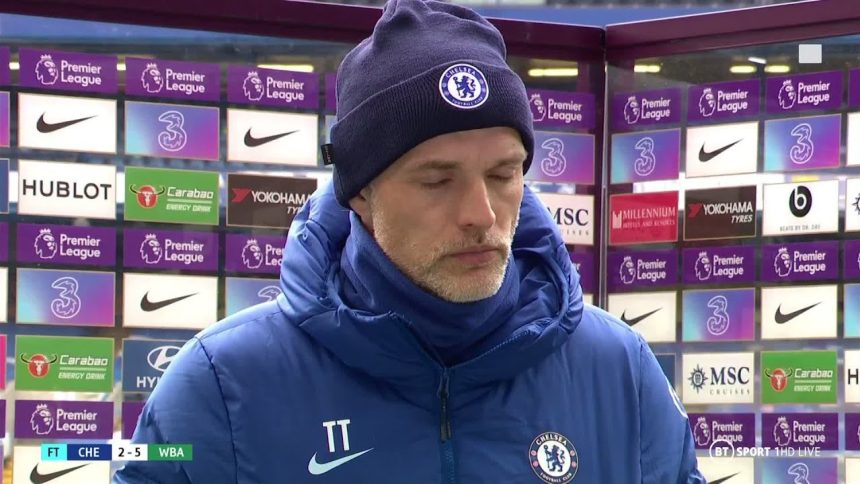 Manager for Chelsea Football Club, Thomas Tuchel who has been undefeated for almost 3 months after signing up as the coach of the English side comes to an end after he lost his first match.

Chelsea who played home lost their game against West Bromwich Albion which held yesterday, Saturday, April 3rd, 2021 at Stamford, and it was a very sad moment for the fans of the club as they lost 2-5 to West Brom.

The game yesterday started off in good and equal capacity with both teams doing their things, but it all started to go wrong following the Red card incident against Thiago Silva, This made Chelsea broke down due to the fact that they had to play with 10-men on the field.

RED CARD! Thiago Silva was sent off
29 min: Already on a yellow card, Thiago Silva slid in to try to block a Yokuslu shot from the edge of the penalty area and accidentally took out the Turkish midfielder, and then got sent off!

Chelsea vs West Brom 2-5: This is also a big headache to Chelsea’s Manager, Tuchel, who still wanted to keep his reign of being undefeated just as he did for the past months had to sadly come to an end.

Under his watch, Chelsea has never lost a game for the past three months until yesterday, even though in their previous game against Leeds United they drew playing 0-0.

Speaking to Chelsea TV in the video you about to watch below after the game to give his account on what actually went down, Thomas Tuchel stated that this defeat is a big wake up call for them.

According to his they we were unable to cope with the situation they found themselves into after the Red Card incident and do not know why but they gave away to easy goals.

Watch the video below as Tuchel speaks more about Chelsea’sdefeat to West Bromwich Albion;