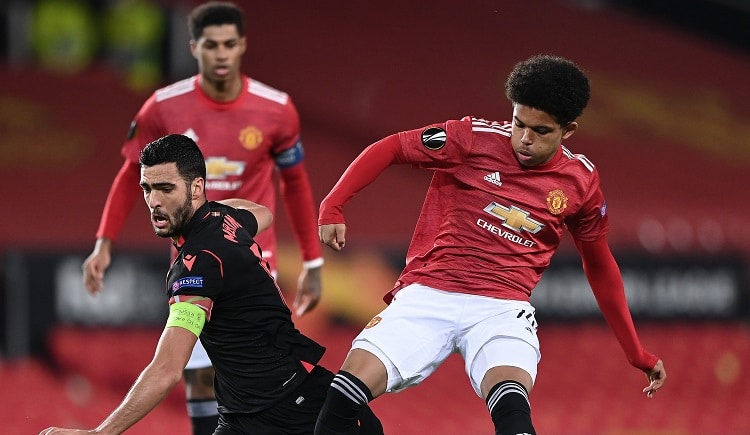 Manchester United were in control of this tie as soon as last week’s opening leg finished 4-0 in their favour.

To Real Sociedad’s credit they came to play this evening and Ole Gunnar Solskjær’s side did an efficient job of containing the Spaniards – and thus can be happy with a clean sheet and the knowledge they are safely into Friday’s last-16 draw.

Whoever United are paired with will hardly relish facing them and with Shola Shoretire on for the last 15 minutes where he joined Amad Diallo, who is a year older, there is a freshness about Solskjær’s ever-evolving squad that augurs well.

At 17 years and 23 days Shoretire became United’s youngest ever footballer in continental competition, lowering Norman Whiteside’s previous record of 17 years and 108 days, which was set in 1983.

Harry Maguire was given a rare rest from what remained a strong XI selected by Solskjær as the inclusion of Bruno Fernandes, captain for the night, emphasised. The margin of United’s advantage meant this should be an exercise in professionalism plus an opportunity to boost confidence ahead of Sunday’s trip to Chelsea. And, they began in this manner.

Anthony Martial had a shot blocked, Daniel James flipped a chip in for Fernandes, and Fred made a charge-down. Sociedad, though, showed intent, too.

Adnan Januzaj delivered an early corner from the left, then a little later Aihen Munoz launched a raid along the same side.

This claimed a throw-in which he took to Mikel Oyarzabal and when the No 12 crossed in the return United were in momentary disarray before Nemanja Matic cleaned up.

This seemed to be the warning United needed as they took control for a passage, pasing the ball about.

But James was tempted into a lunge on Andoni Gorosabel who went down in the area – the latter appeared to initiate this by sticking a leg out – and Lawrence Visser, the referee, awarded a penalty.

Here justice may have been served as Oyarzabal’s penalty was skied and United escaped.

When Sociedad’s captain crossed low from their next attack Victor Lindelöf ensured the same for his side, the Swede sticking out a boot to turn the ball away for a corner.

United were a menace going forward, however. Sociedad were shredded with one razor-sharp move that saw Mason Greenwood lobbing the ball to Fred whose turn-back found a lurking Fernandes.

His shot from distance was classy and only Alejandro Remiro’s bar saved his team.

Yet Sociedad continued to offer far more than in last week’s drubbing. Alexander Isak’s pace was a next test for United and Eric Bailly in particular and the centre-back showed good pace to ease the ball under his control.

His clever run was spied by the ever-crafty Fernandes whose sand-wedge of a pass was placed precisely onto the Welshman’s head and only Remiro’s reflexes kept the ball out.

For the second half Solskjær made a triple change. On came Marcus Rashford, Brandon Williams and Axel Tuanzebe for Fernandes, Wan-Bissaka and Fred.

Rashford’s impact was instant: he floated a ball into Martial and the centre-forward was fouled 30-yards out. Rashford stepped to the free-kick and hit a swerving shot that befuddled Remiro and was only barely wide.

Sociedad’s riposte was to move upfield and Modibo Sagnan headed against Dean Henderson’s bar in one of the defensive scrambles United often find themselves in. This period was akin to a hockey match as each side took turns to skate downfield and take aim.

Greenwood was next to do so, dropping a shoulder, moving inside, and unloading at range, Remiro saving well low down.

The youngster is a natural near goal and his next trick was to use quick feet to bedazzle Sociedad’s defence in constricted space in the area, the only disappointment his hitting the side-netting from so close in.

Greenwood, who is 19, was joined by United’s latest teenage starlet, the 18-year-old Amad Diallo, who replaced the injured James for the last half hour or so.

The Ivorian soon saw Tuanzebe have a header chalked off after Lindelöf kneed Jon Bautista’s head from Telles’s corner.