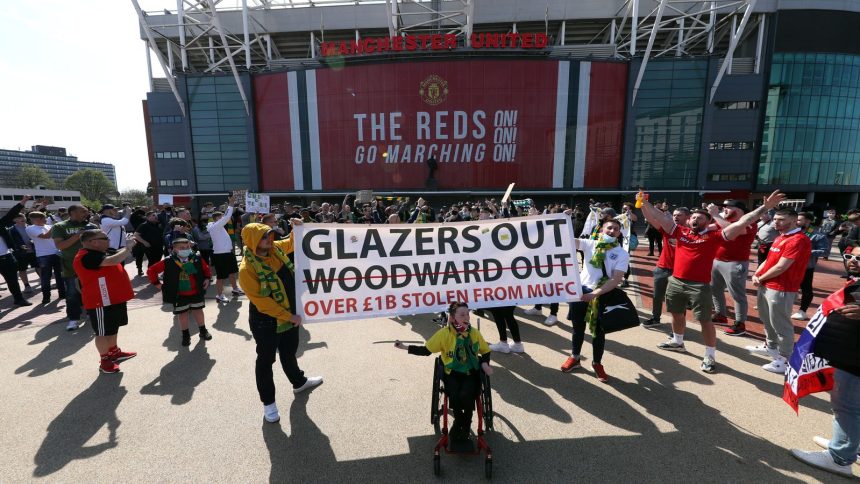 The game, which was initially set for a 4.30pm kick off on Sunday afternoon, was delayed after the protests by United fans outside Old Trafford and at the Lowry Hotel where the team are based before home matches.

Anti-Glazer protests were planned for before the game outside the ground, with an estimated 10,000 turning up and displaying placards, banners and chanting against the club’s American owners.

Some fans gained access to the stadium and even invaded the pitch, as the vast majority of the protests went peacefully, until some clashes with police forced the authorities to clear the area around Old Trafford.

There were then discussions over whether to move the kick off time to later on Sunday evening, or to postpone for another day — the latter of which was confirmed at around 4.40pm on Sunday.

Statement from United board

Following discussion between the Police, The Premier League, Trafford Council and the clubs, our match against Liverpool has been postponed due to safety and security considerations around the protest today. Discussions will now take place with the Premier League on a revised date for the fixture.

Our fans are passionate about Manchester United, and we completely acknowledge the right to free expression and peaceful protest.

However, we regret the disruption to the team and actions which put other fans, staff, and the police in danger. We thank the police for their support and will assist them in any subsequent investigations.

He says the Glazers have to sell United.

“The Glazer family tried to implement something two weeks ago which would’ve damaged every single community in this country that’s got football at the heart of it — and that’s why they’re dangerous.

They are dangerous to the concept of fair play and equal opportunity in football.

“You can’t force someone to sell a football club and the Glazer family have proven before that they are stubborn and resilient.

“But the time has come now, and they are going to make a fortune out of the club, to put it up for sale.

“There is a danger that the people who buy it won’t treat it as well but l think it [selling] is the right thing to do.”