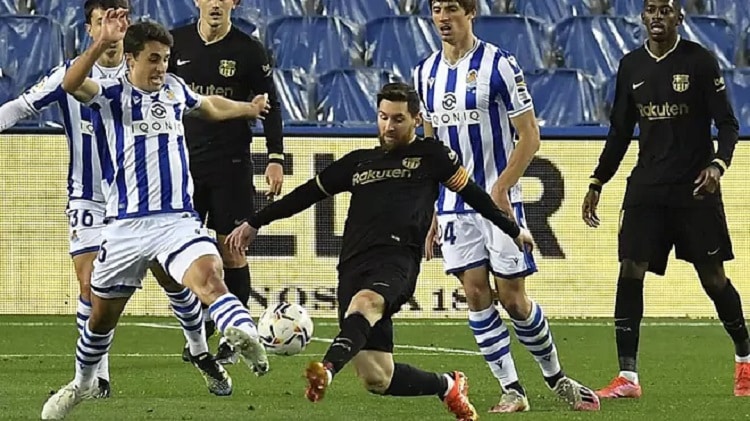 Barcelona is back in second place and go into the international break on an 18-game unbeaten streak with 12 wins in their last 13 La Liga games thanks to a 6-1 destruction of Real Sociedad at Anoeta. The Blaugrana played a spectacular match, scored one great goal after another, and looked truly unstoppable on the night.

FIRST HALF
The first half was intense and competitive, with both teams denying each other space early on with equal 3-4-3 formations. As time went on the game became more open, especially as Barça started losing easy balls in midfield and allowing La Real to counter-attack, with Aleksander Isak becoming a real problem for the Blaugrana defense.

Isak had the two best chances of the half for the home team, with two shots on his stronger right foot from really good positions inside the box, but Marc-André ter Stegen stepped up and made two great saves to keep the ball out of the net.

As we approached halftime Barça finally started to hit some passes in the final third and open up a stubborn Sociedad defense, and the goals came in a five-minute span: first, it was Antoine Griezmann who scored from eight yards after Ousmane Dembélé had a tap-in brilliant stopped by the goalkeeper, and Sergiño Dest scored his first league goal of the season with a powerful finish after a beautiful Lionel Messi assist.

At halftime, an inconsistent Barça team was clinical when it mattered and had a two-goal lead, but the game looked far from over ahead of the second half.

SECOND HALF
After an up and down first half, Barça put together one of their best halves of football in recent memory. The Blaugrana were insanely good, toying with the Sociedad defense with their passing and movement, and they scored some more goals to turn a tricky game into destruction.

First, it was Dest who got his second of the night after a beautiful run and assist by Jordi Alba, then Messi made it 4-0 after a spectacular assist by Sergio Busquets, and Dembélé went on a ridiculous solo run and found the bottom corner with a perfect strike to make it five for the visitors.

La Real was stunned but did manage a consolation goal thanks to a great strike by Barrenetxea, but the game was more than decided and there was still time for another great team goal as Alba and Puig played a gorgeous one-two and Messi scored his second and Barça’s sixth.

The final whistle came to end a brilliant night from a Barça team that goes into the international break not only as of the in-form team in the league but a side that looks hungry and ready to win a title this season if given the chance.