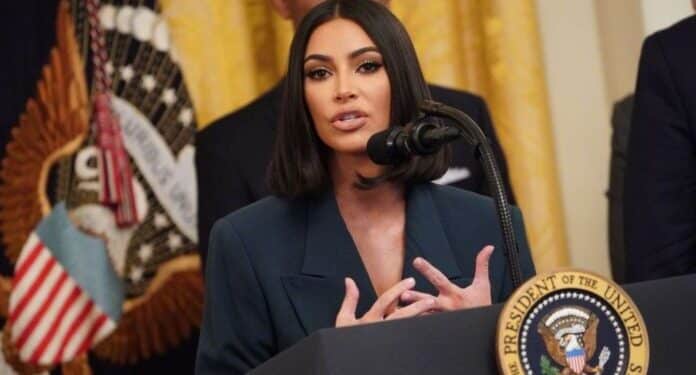 Kim Kardashian is one step closer to her dream of becoming a lawyer after revealing she has passed a key law exam on her fourth attempt.

The reality TV star and businesswoman posted the news on social media, urging fans never to give up on goals they have set their mind on.

Kardashian, 41, has spent years advocating for criminal justice reform, including lobbying at the White House.

She announced in 2019 that she wanted to go further and qualify in law.

Without an undergraduate degree, she has been studying on an alternative apprenticeship pathway under the supervised mentorship of lawyers.

Kardashian said she had been previously told that her journey would be “close to impossible” and “harder than the traditional law school route”.

But in an exciting announcement on Monday, she said she had passed California’s first-year law students’ exam – also known as the baby bar – on her fourth attempt.

“Looking in the mirror, I am really proud of the woman looking back today in the reflection,” she said about her result.

“For anyone who doesn’t know my law school journey, know this wasn’t easy or handed to me,” she added. “I failed this exam three times in two years, but I got back up each time and studied harder and tried again until I did it!!!”

Kardashian’s tweets praised those who had helped her get through the exam with “10-hour days, daily four-hour zooms” and “practice tests week after week”.

The exam has an overall success rate of about 20%, according to recent pass figures. Kardashian will still have further study and another bar exam on her pathway to qualification.

Kim Kardashian found fame alongside her family on their hit reality television show, Keeping up with the Kardashians, which began airing in 2007. The show saw Kim and her siblings gain huge online followings and business success across a range of industries.

Using her influential platform in a different way, Kardashian has increasingly voiced her support for campaigns to change the US justice system.

She has lobbied for clemency in individual cases and been critical of the long sentences handed down to first-time offenders, and the disproportionate impact the law can have on ethnic minority communities.

Her late father, Robert Kardashian, was himself a lawyer. He was famously part of the legal team that represented former American football star OJ Simpson in his high-profile 1995 murder trial.

In Kardashian’s posts on Monday, she said her father would be “so proud” and “shocked” about her change of path.

Bar Bri Law School bar prep- I couldn’t have done it without you guys setting me up w professors Sam Farkas & @ChuckShonholtz you changed my life. Thank you for putting in the hours! 10 hour days, daily 4 hour zooms, our in person practice tests week after week. We did it!

But she was not the only celebrity enjoying academic success over the last few days.
Rapper Megan Thee Stallion graduated from Texas Southern University with a Bachelor’s Degree in Health Administration on Saturday. She previously spoke about wanting to complete the degree in honour of her mum, who died of brain cancer in 2019.

Fellow rap powerhouse Cardi B was among those who congratulated Megan online.

Congrats @theestallion all of your hard work paid of!!! I know your Parents are super proud of you. pic.twitter.com/iqveHPWf4x