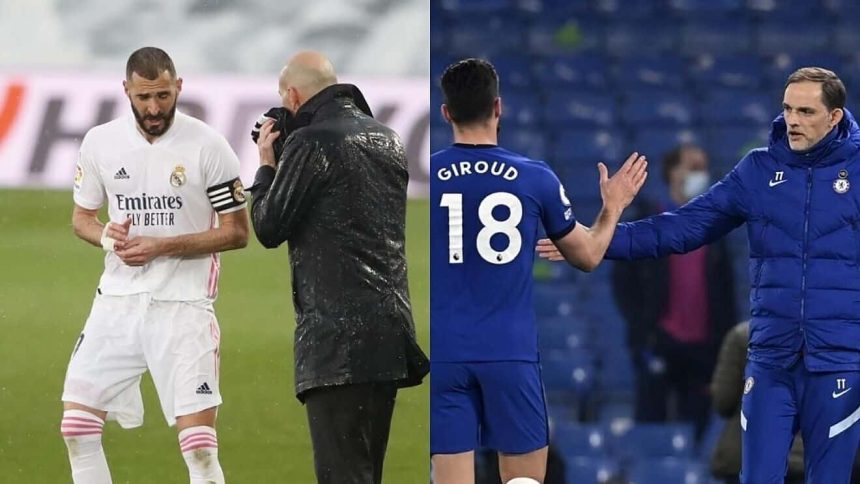 After impressing in the 1-1 draw at Estadio Alfredo Di Stefano in the rain, with Karim Benzema cancelling out Christian Pulisic’s early strike. The result gives Chelsea the edge due to the away goal rule and a goalless draw will be enough for the Londoners to reach the showpiece in Istanbul on 29 May. The winner will set up a date against Manchester City in Istanbul later this month.

As far as preparations for the heavyweight clash goes, Chelsea warmed up in fine fashion, securing a solid 2-0 win over local rivals Fulham in the Premier League this past weekend. Real Madrid, too, picked up a victory over CA Osasuna by the same scoreline as their midweek opponents while also managing to rest some of their key players ahead of the trip to west London.

Chelsea will once again be without the services of midfielder Mateo Kovacic, who will sit out against his former club due to a thigh injury.

Chelsea defender Antonio Rudiger is in contention but will have to wear a protective mask. The centre-back, 28, missed Saturday’s win over Fulham after picking up a late injury in the 1-1 draw in Madrid with a facial injury, is available for selection and should be able to play with mask on, Thomas Tuchel confirmed ahead of the game.

Tuchel is expected to make a few changes to the team that took the field against Fulham. No alteration is expected between the sticks though, with Edouard Mendy continuing in goal after a brilliant display at the weekend. Rudiger ought to return to the side, slotting in as the left-sided centre-back in place of Kurt Zouma. Andreas Christensen and Thiago Silva should hold on to their places.

Chelsea skipper Cesar Azpilicueta should also return to the side, slotting in at right wing-back at the expense of Reece James while Ben Chilwell continues on the opposite side.

N’Golo Kante and Jorginho were both rested for the weekend clash and should walk back into the starting XI, starting in the middle of the park, from where they will look to cut out the influence of Luka Modric and Toni Kroos.

Mason Mount, who has been Chelsea’s in-form man, should hold on to his place as one of the two attacking midfielders while Christian Pulisic ought to return after not being involved in the league game. Timo Werner had a good outing against Fulham but Kai Havertz, who starred with a match-winning brace, ought to line up as the centre-forward for Chelsea against Real Madrid.

Boss Thomas Tuchel says his players must believe in themselves if they are to beat a Madrid side who are winless in their last four away games against English sides in the Champions League.
“We felt we can be stronger. The challenge is to keep the intensity going through the whole match,” he said.

“It is a semi-final, the pressure is on, a knockout game so to arrive with a level of belief and confidence is necessary or we will have no chance against a team like Real Madrid.

“I never felt we had a holy grail to reach the final, or winning the Champions League is the only target. I have a strong feeling that every win counts, the club demands it that we win any game, no matter who is on the other side of the pitch.”

Real Madrid have been handed a triple boost ahead of their trip to London as captain Sergio Ramos is fully fit and part of the travelling squad. In addition, Federico Valverde has recovered from coronavirus while Ferland Mendy is also back to fitness and has been included for the trip as well.

However, Raphael Varane has been ruled out after picking up an injury at the weekend. He joins Lucas Vazquez and Dani Carvajal on the sidelines.

Real Madrid manager Zinedine Zidane set his team up in a three-man defensive formation for the first leg. However, he is expected to switch back to his tried and tested 4-3-3 setup on Wednesday night in front of former Chelsea goalkeeper Thibaut Courtois.
With Carvajal and Vazquez unavailable.

Real boss Zinedine Zidane said: “We’ve got our leader and our captain with us. I won’t be taking any risks. Sergio is here with us. That means that he’s ready to play, that’s all it means.”
Los Blancos are chasing a 14th Champions League title and their first final appearance since 2018.

Chelsea aiming for first Champions League final since 2012 – the stats
Chelsea will face Real Madrid for the fifth time in European competition and are unbeaten against them in the previous four (W2 D2). This will be the first time across the five meetings that Chelsea have hosted the Spanish side.

Chelsea have progressed from five of their past seven knockout ties in the Champions League when avoiding defeat away from home in the first leg.

However, one of these two eliminations came in their last semi-final appearance in the competition, v Atletico Madrid in 2013-14 (0-0 in first leg, 3-1 defeat in second leg).

Manager Zinedine Zidane is looking to secure his fourth progression in four Champions League semi-finals, which would equal the record for most semi-final progressions by a manager in competition history (along with Sir Alex Ferguson, Carlo Ancelotti and Marcello Lippi).

Chelsea boss Thomas Tuchel has only lost four of his 18 home games as a manager in the Champions League (W12 D2), with his sides scoring 48 goals across these fixtures – an average of 2.7 per game.

Real Madrid striker Karim Benzema has scored 71 goals in the Champions League and could become the outright fourth top scorer in the competition’s history if he scores in this game, overtaking Raul (71).