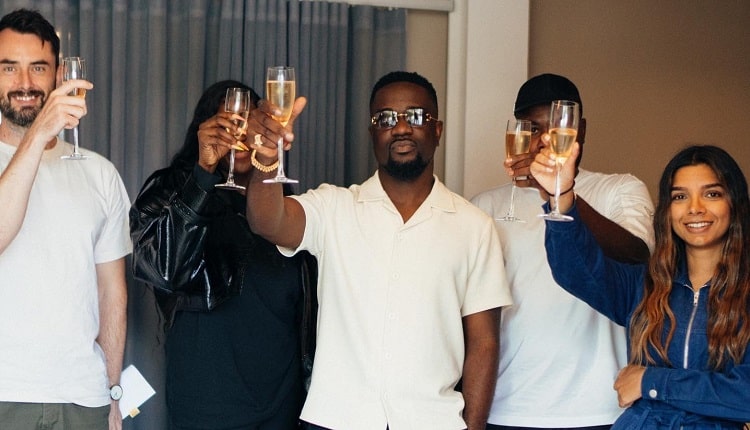 This new contract is just great news for Sarkodie and his entire Sarknatives as well as a boost for the Ghanaian music industry.

This great news comes just a few days after the rapper released his much anticipated 15-track No Pressure Album which is already topping charts.

Sony Music Publishing (“SMP”) is the world’s No. 1 music publishing company headquartered in New York with a network of 38 offices across the globe.

With its songwriter-first mission, Sony Music Publishing provides best-in-class services on a global scale to its songwriters and catalogs while also leading the industry with its high-level synchronization operation and production music businesses.

Sony Music Publishing is a part of Sony’s suite of powerful entertainment brands, reflecting its identity as “A Creative Entertainment Company with a Solid Foundation of Technology”.

Sony Music Publishing UK in announcing the deal took to their official and verified Twitter account on Monday, August 2, 2021, to share photographs confirming that Africa’s most decorated rapper, Sarkodie is now a member of their family.

“We are beyond excited to welcome @sarkodie to the SMP family! Great things to come Bottle” they tweeted.

We are beyond excited to welcome @sarkodie to the SMP family! Great things to come 🍾🍾🍾 pic.twitter.com/eQ3c7ecFhs

Few minutes after the tweet from Sony, Sarkodie also retweeted it and also confirmed it from his side to the rest of his fans as he also shared pictures from the signing of the contract “Officially part of the SMP @SonyMusicPubUK family” he tweeted.

As the world’s No. 1 music publisher, Sony Music Publishing provides a full range of market leading services, including synchronization, administration, film, TV and production music, as well as taking a prominent role in advocating for songwriter rights.

The company’s synchronization department comprises around 125 music professionals worldwide, all with an obsessive knowledge of popular music and years of experience in music supervision, production and licensing. They are on hand to create expert, customized song searches tailored to meet any creative, demographic or budgetary need.

In a rapidly changing industry, Sony Music Publishing is at the forefront of the digital music space. The company has taken the lead in licensing its repertoire on behalf of its songwriters to the full range of new and established digital services.

Sony Music Publishing has negotiated direct deals around the world with virtually all the significant digital music services including Spotify, Facebook, Apple Music, Google Play, YouTube and many others. SMP’s efforts in this area ensure fair compensation for songwriters and music publishers for the use of their music on streaming services.

The company has also taken an industry-leading position to press for legislative reform such as supporting the passage of the Music Modernization Act in the United States, which modernizes the copyright law for the digital age. Sony Music Publishing has also worked to reform the outdated consent decrees that govern the way public performance licenses are licensed in the United States by ASCAP and BMI.